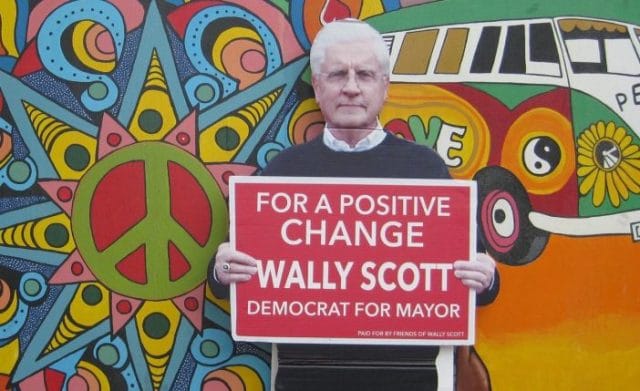 Reading, Pennsylvania mayor Wally Scott made national news last week when he decided to cancel a ceremony to raise the pride flag over city hall and refused to let it fly. It would have marked the beginning of the community’s week-long Pride festivities.

But, at the last minute, Scott called City Council president Jeffrey Waltman to ban the flag from flying in front of City Hall. Waltman tried to convince him to reconsider, but he was not successful.

“It’s strictly, to me, a movement,” Scott said at the time. “And I don’t believe we should take part in any movement. I never put anything that was a movement up on the flag poles. I’m just not part of that and don’t think we should be.”

But Scott has changed his mind again, saying an emotional meeting with a “prominent woman” in the community helped him see the light. He said the woman did the most powerful thing any LGBTQ person can do: she shared her coming out story.

The unidentified lesbian told the mayor that she came out to her mother as a girl and said to her mom that “God made a mistake.” The woman’s mother, however, refused to let her daughter believe she was a “mistake.”

“Your mother loves you,” she told her daughter according to the mayor. “You’re not a mistake. I’ll stand with you wherever you want to go.”

Scott said the woman’s story helped him to realize that he was sending an undeniable message to LGBTQ residents that raising the flag was a “mistake” and it forced him to change his mind.

“I told them they could keep the flag up,” Scott told the local ABC station. “I told them I wish you’d keep the politics out of it though. What I am interested in is the people that the flag represents.”