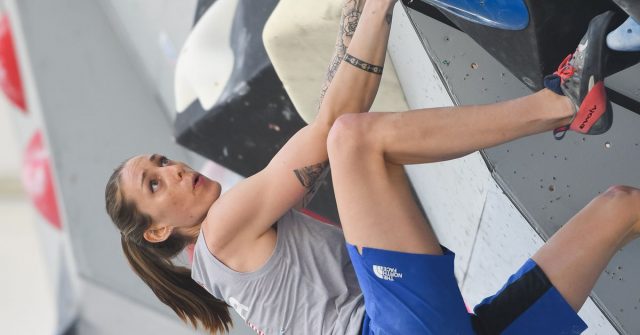 Alex Johnson is a professional rock climber and a member of the USA Climbing Bouldering National Team. The 30-year-old, who has been climbing since 1997, told People Magazine she now has her sights set on Tokyo 2020.

It will be the first Summer Olympic Games to include rock climbing as an event.

Last week, Johnson joined USA Women’s World Cup winners Ali Krieger and Ashlyn Harris among others on the set of NBC’s Today Show, to celebrate the one year countdown to the opening ceremonies. She posted pictures from the morning on Instagram.

It’s been RAD hanging out in NYC celebrating being one year out from the Tokyo 2020 Olympics with all these awesome badasses! @todayshow @teamusa #Tokyo2020 #TeamUSA #Olympics #Olympics2020 #OneYearOut

Just 13 months ago, the two-time world cup gold medalist and five-time national champion was enjoying her retirement from her sport, and accompanied her friend to a Taylor Swift concert.

“It was Aug. 31 and it was a favor to a friend who didn’t want to go alone, and I was not super excited to be there,” she admitted to People.

“It sort of was this crazy epiphany,” Johnson said, watching Swift perform. Johnson is the same age as the singer, and she said she found herself inspired by Swift’s tenacity and perseverance, realizing: “I could do it, too.”

“I believe our sport to have one of the most vibrant and inclusive communities out there, and as a younger sport just breaking into the Olympic Games, we need a confident voice from someone who has our best interest in mind first and foremost,” she wrote in her application. “I would love to advocate for and on behalf of USA Climbing, our athletes, my peers, and our community.”

And now she’s training to be one of the 100+ out athletes hoping to compete in next summer’s games.

Johnson told People she is one of the few out LGBTQ professional climbers. She and her girlfriend, Bree, met in 2014, and they said their friendship blossomed into romance. Johnson called it “a crazy whirlwind.”

She said she went public with their relationship to help a queer girl she was coaching who was being bullied. Johnson said she made a spur of the moment decision to show the girl she was not alone.

“Helping just her feel better about herself [was] awesome,” Johnson said. “But I keep getting all these messages that are heartwarming.”

“Doing it for that reason alone is enough,” she told the magazine.

For Pride, Johnson and her girlfriend took part in an online campaign to help homeless LGBTQ+ youth, by posing in Pride underwear.

Proud to be meeeee! (And be with Bree!) We’re super excited for Pride Month, and @MeUndies is donating $1 for every pair of Pride undies sold to the @happyhippiefdn dedicated to helping homeless LGBTQ+ youth! So they’re comfy AND for a good cause. #meundiespartner

Bree is also by her side for all that an Olympic hopeful has to endure, from the gym to a specialized diet.

“I know the sacrifices she’s made to support me in this and that she understands this could be a once-in-a-lifetime thing,” said Johnson. “And as soon as I’m done with this, whatever she wants to do, we’re going to do that.”

Read about the other Olympic hopefuls profiled by People by clicking here.