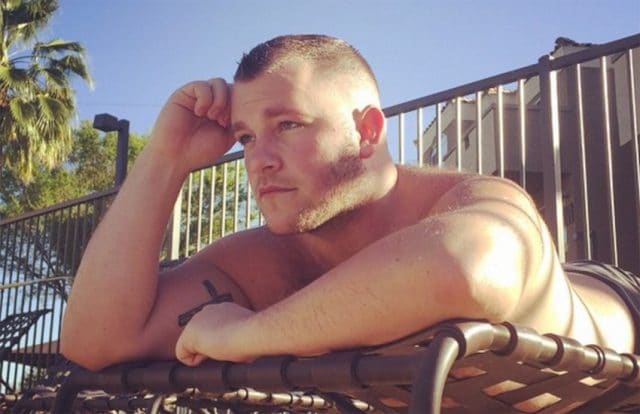 Mark Stinson reveals the secrets of the sky

A few months ago, we posted an Instagram round up of ‘cute, fun and fly’ gay cabin crew.

We led with an image of Mark Stinson, from Philadelphia, and it’s fair to say the burly, bearded traveler went down well with our readers.

Here, we follow up with Mark to find out more about life in the sky, from his favorite destinations to long distance relationships…

What’s the best thing about working in cabin crew, other than the travel?

The best thing for me is the conversations with people.

Whether it’s with other flight attendants or people who sit across from you on the jump seat, sometimes you can meet the most incredible people and make friendships that last a lifetime. I guess I call it ‘jump seat conversation’. That would be the best phrase to describe it.

Is it a misconception that a lot of gay men work in cabin crew?

No. That’s the blatant truth! Gay men, for some reason no one knows, are incredibly great at being flight attendants. I have worked with some of the greatest people who are LGBTI.

How many countries have you been to?

I have only been to 17 different countries, including Canada, Greece and Turkey. That’s nothing compared to most flight attendants. As a newer flight attendant of three years, you tend to save your money instead of spending it on trips.

People don’t realize that you have to do your time as a junior flight attendant before you get to do awesome trips and make the good pay. I’m OK with it though because I love my job.

Does your boyfriend mind you traveling all the time?

Lol. I am single as of right now, but it takes a special someone to date a flight attendant. We miss important days of the year sometimes.

How did you end up in the job?

I applied online. It’s not as easy as it sounds. The interview process was rigorous. Finally, out of a group interview of 120 people during a group interview, they picked three of us. It was rumored at that time that my company had over 500,000 people apply for the job and I was part of the lucky 1,200 to be chosen. I was working in marketing before I became a flight attendant and I was miserable with my life and job. My mother applied for the job and got it, but unfortunately she couldn’t commit because of health reasons. It encouraged me to apply because if my mom could do it, I could definitely do it. I am my mother’s son after all!


What’s been your most memorable experience in the sky?

Where to begin!? The most memorable for me was on the day that my sister had her second child. A woman came on the plane with the cutest seven-month-old twins. I of course was a bit emotional with babies that day since I was missing my sister and family. It was a long flight from LAX to PHL. During the flight, the woman had to go to the bathroom. She couldn’t fit in the lavatory with the babies so she asked me to hold them and I was so overjoyed!

Hanging with the Man-O-War!

They were so flipping adorable and chunky. It was a moment for me because family is so important and it reminded me that I am providing for my life, my future, and my family by working this job. I can’t wait for the day that I take my nephews and niece to Paris to do a little shopping and introduce them to the many cultures of the world. Maybe one day I will even take my own children.


How do you deal with jet lag?

The cure for jet lag is sleep. Flight attendants do not mess with their rest periods! If you have a red eye from Hawaii, you know to get at least six to eight hours of sleep prior to working a flight to LAX or PHX. Then when you get home at 6 or 7am, you know to take a small three-hour nap. You can be caught up on sleep in a snap and correct your sleep schedule.

What’s your favourite destination and why?

Believe it or not, San Jose, California. It’s an amazing place to fly into because you can get a rental car and drive through the Santa Cruz mountain pass, which is stunning, to Santa Cruz, CA. There you have access to highway 1 which runs north and south on the California coast. It has some of the most spectacular views and beaches in the United States. It’s simply god made. The worst destination for me has been Reno, NV. No offence to all who live there. Other than Lake Tahoe being gorgeous, it’s a dying and sad town in my opinion.

Where was your most romantic trip and why?

I did a trip to Paris. I mean, do I have to say more? My hotel room over looked the Eiffel Tower. It was magical.

Have you ever experienced homophobia or discrimination abroad? Ever while working? (If so, were your colleagues supportive?)

Yes, yes, and yes. Not everyone can just be okay with anyone. I wish we lived in a perfect world where everyone is just accepting, but we don’t. Since coming out, I have learned that we can let these things destroy us or we can rise up and become better people because of these types of experiences.

Life is too short to worry about what people think of me, so I make it a point to make others feel good about themselves so they don’t have to worry about me. It’s my own personal way of trying to love others and possibly even change a few hearts!

Would you avoid a certain country because of the laws there?

Absolutely not. I have a right to a personal life, but I also know that I am responsible for that personal life and where I take it. Take Iran for instance. I’m not going to go to Iran wearing a rainbow flag around my neck and walk around in my underwear. (I wouldn’t do that anywhere, really).

I also wouldn’t avoid going to Iran and seeing all of its beauty, culture, and people just because their laws want to kill someone like me. There are good people with good hearts all over the globe and it has been my experience that we always find one another. My sexuality is not what defines me. I am first and foremost human.

Where were you going the last time you stepped on a plane, apart from home?

The last place I flew to was Los Angeles, California. The state of California, in general, is one of the best places to visit. It’s a bit pricey but worth the experiences.

Do you ever hope to get married, and if so, would you consider a destination wedding?

I do hope to get married – I would consider a destination wedding, but only time will tell if it will ever happen. My honeymoon would be in Thailand. I hear the most amazing stories from there and the beaches look beautiful. Can’t wait to visit there some day.

What is your top tip for making it through a long haul flight?

The best thing to do on a long haul flight is hydrate and get some rest. Cabin air is extremely dry and it’s advised to stay hydrated at all times. Sleep and rest are always important too because you could have more traveling to do after a long haul flight.

Where do you hope to visit this year and why?

I hope to visit London. I have some what of a penpal there that I have been talking to since 2012, when I came out. He is a great friend and offers some of the best advice. It would be awesome to meet him in person finally. Just haven’t had the opportunity yet.