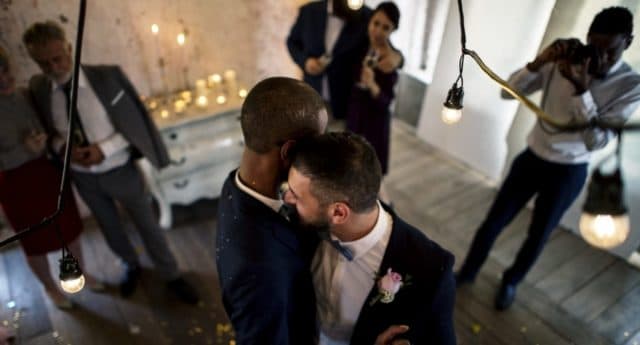 A gay Australian couple has said that they intend to vote against marriage equality in the upcoming postal vote.

The couple, Mark Poidevin and Ben Rogers, met 15 years ago on a website appropriately named ‘Gay.com’. They say it was love at first sight.

Poidevin explained that he loves his partner “dearly” and that “there’s no-one else I’d like to spend my life with than him”.

Despite their love, they will be voting against marriage equality, they told ABC Australia.

“I used to be a believer in same-sex marriage”, Poidevin explained.

He even proposed to his partner and was rejected, as Rogers said it is not his “cup of tea”.

“At the time Ben said it wasn’t for him, that he didn’t believe in it, and I said, ‘When the laws change, would you like to?’”

However, Poidevin’s views soon began to align with his partners and now the prospect is nearing in the form of a postal survey, Poidevin will be voting no.

“There’s never been any discrimination with any of our families, or dramas coming our way because of our sexuality,” he said.

The couple believes that marriage can only be a heterosexual union.

Poidevin said: “When I first came out I think one of the consequences was giving up marriage and children and things like that.

“If we make one exception for one community, that being the same-sex couples, where does it stop?

“Do we then see other cultures being allowed to have multiple marriages? Do we see the age of consent being lowered for another group of minorities?

That is my concern, of where it would lead.”

The couple has had numerous accusations of homophobia levied against them.

However, they said this criticism was poor and argued that “you’re not intolerant if you don’t support a view.”

When asked their predictions about the ballot outcome, they said:

“This could be the Brexit or Trump moment for Australia, where the polls are saying one thing but you go to the ballot box and people are clearly in another mind, going to vote another way.”

The High Court of Australia will hear two challenges from the Yes campaign against the Government’s postal vote.
Even if marriage equality is granted, the couple vowed to never walk the aisle.

“If it’s yes, we’ll be like, ‘Congratulations, everyone can get married’,” Ben said.

In just over a week, ballots for a nationwide postal vote will be sent out asking Australians whether or not they want same-sex marriage depending on the outcome of a High Court challenge.