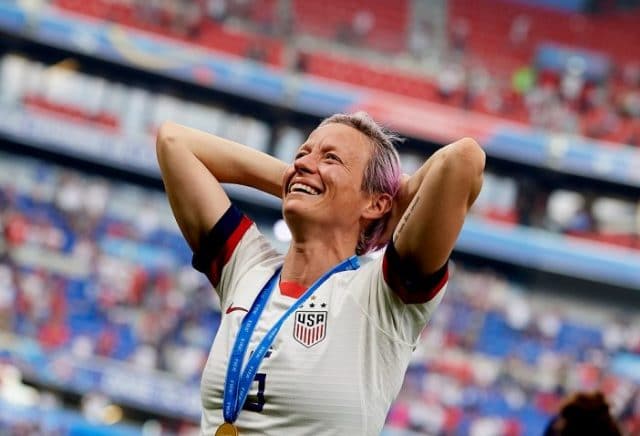 Soccer star Megan Rapinoe would beat Donald Trump in the 2020 election, according to a new poll.

Saying it was responding to “popular demand,” the political research firm Public Policy Polling (PPP) asked registered voters if they would vote for the captain of the U.S. Soccer Women’s National Team or the former host of The Apprentice.

Not only did she lead her team to victory in the Women’s World Cup, but Rapinoe also won among Democratic voters, men, all racial groups except white people, and voters under 44.

PPP noted that a majority of the undecided voters in the Rapinoe-Trump poll voted for Hillary Clinton in 2016 and only 8% of them approve of Trump, which means she has more room to grow her numbers than Trump does.

DOES THIS MEAN MEGAN RAPINOE IS PRESIDENT NOW? pic.twitter.com/kmgpxD6QJQ

On a more serious note, PPP said that Trump polls in the low 40’s against any Democratic candidate, whether they’re actually running or not.

Rapinoe and Trump have been feuding in interviews and on social media.

“I’m not going to the fucking White House,” she said, even though sports teams usually visit the White House after major victories.

Since she also said that Trump wouldn’t invite her team anyway, Trump responded by saying that he would invite them, but then waffled weeks later after the U.S. team won the Women’s World Cup.