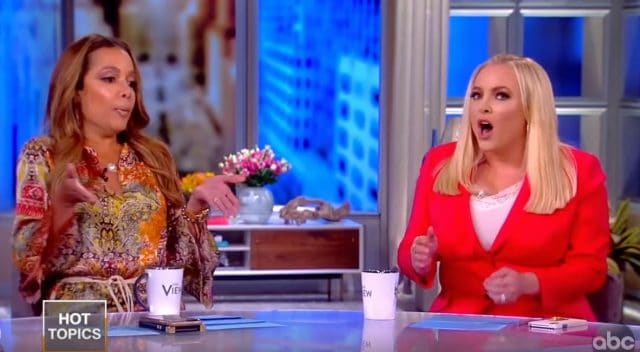 The View host Meghan McCain took issue with a pediatrician’s assessment of the deplorable conditions she saw after touring Texas detention facilities for immigrant children last week, comparing conditions in the facilities to those seen in “torture facilities.”

Dr. Dolly Lucio Sevier, who made the chilling observation in a medical declaration obtained by ABC, said conditions for unaccompanied minors in the McAllen facility included “extreme cold temperatures, lights on 24 hours a day, [with] no adequate access to medical care, basic sanitation, water or adequate food.”

Sevier, a private-practice physician in the Rio Grande Valley, told ABC it felt “worse than jail.” It “just felt … lawless,” she added. “Imagine your own children there. I can’t imagine my child being there and not being broken.”

While touring facilities in Clint and McAllen, Sevier and a group of lawyers witnessed listless, dirty, diaperless babies and toddlers; crowded conditions; and children sleeping on concrete floors. Older children were taking care of younger ones as best as they could in the absence of any adult help, said one witness. The youngest “inmate” was less than 3 months old.

During a panel discussion on Tuesday about the horrifying situation at Trump’s detention facilities, McCain objected to what she described as “hyperbole” when it came to describing the filthy border detention centers as torture facilities and concentration camps.

After co-host Sunny Hostin pointed out that several children have recently died in immigration custody, McCain conceded that the conditions in the centers are “horrific” and that this is a “total humanitarian crisis,” but took issue with experts “calling these places ‘torture facilities.’”

“I understand it’s a humanitarian crisis,” McCain said. “It’s horrific to detain—like you said, people in jail get soap and toothpaste. But I know what a torture facility looks like. I’ve been to one.”

As co-host Joy Behar attempted to interject, McCain raised her finger and exclaimed: “Listen to me. Excuse me!”

“When you have a facility whose specific purpose is to torture people, that is not what’s going on,” McCain shouted.

“Yes, it’s inhumane but there’s a big difference between a Hanoi Hilton and what’s happening at the border right now!” referring to her late father, Sen. John McCain (R-AZ), who spent five-and-a-half years as a prisoner of war in Vietnam’s Hoa Lo Prison.

“I don’t care what we’re calling them,” she continued. “Kids are dying inside of them. We should care about the dead kids that have come out of them.”

“Well, my father couldn’t lift me above his head as a child because of his torture wounds so I do think that hyperbole is important,” McCain argued.

Behar noted that while the detention camps may not have been intended as torture facilities, they ultimately “turned out to be torturous.”

McCain complained that the use of terms like “concentration camp” and “torture center” is “when you get people to stop paying attention” to the issue.

“Calling it a concentration camp, in a very strange way, has put the focus on the situation,” Behar contended, referencing Rep. Alexandria Ocasio-Cortez’s (D-NY) description of the centers last week.

“And it worked for you,” McCain shot back. “It didn’t work for me as a conservative Republican.”