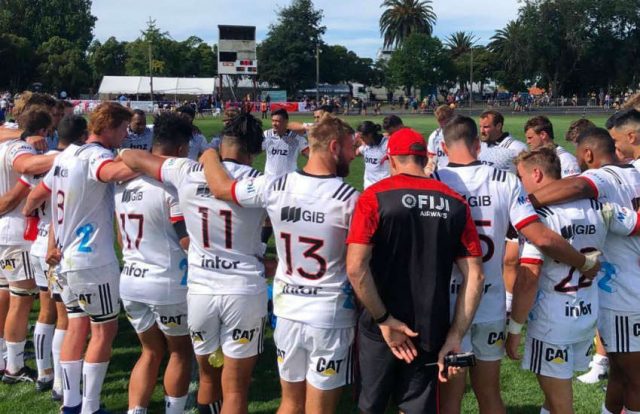 Video footage shows three people involved with Crusaders in an altercation with two men in a McDonald’s in Long Street, Cape Town, South Africa. One of the videos appears to show one of the Crusaders team impersonate the alleged victims with a faux camp voice.

Crusaders are in South Africa for the rugby union competition, Super Rugby.

One of the people receiving the abuse, Alexadros Paterimos, gave their version of the story on Instagram: ‘As we entered, we were met with jeering and sniggers from them.

‘They then proceeded to record us as a joke… When catching them in the act, they told us they did it because we looked funny to them.

‘They then said they can record us in a public space if they want to. Upon telling them that this is wrong they then began physically intimidating us (coming up to our faces, telling us we better stop arguing or they will “fuck us up if we don’t watch it”) then after arguing that straight white men are losing power – we were met with homophobic slurs, limp wrists, and high pitched voices which were clearly in gest [sic.].’ 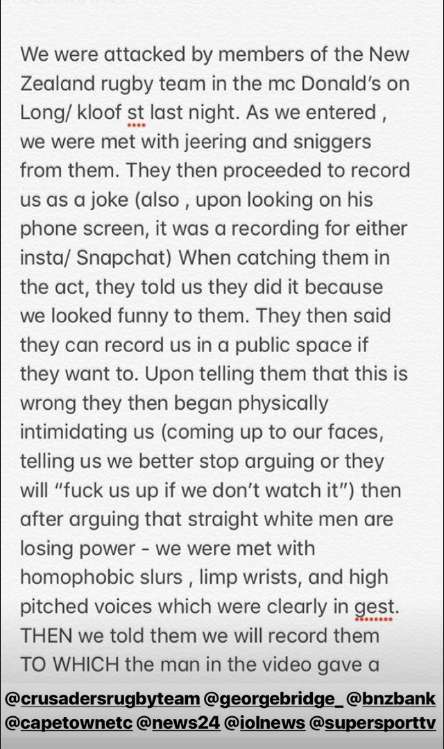 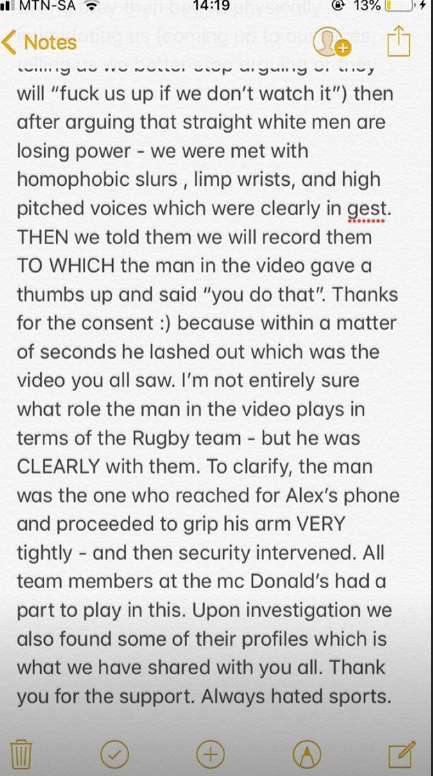 He then goes onto claim a member of the team ‘lashed out’ at him. This appears to be visible in a video posted on the alleged victim’s social media. The person isn’t immediately identifiable as a coach or player, but is believed to be a security adviser.

Tweets by Adam, another of the alleged victims, say players George Bridge and David Havili were the ones throwing the abuse.

The official Twitter account for the Crusaders denies the allegations. In a statement they said: ‘The three players, team management and the South African-based security adviser with them, strongly refute the socialized account of what happened.

‘They are devastated by the allegation and the implication of homophobia.’

CEO of Crusaders, Colin Mansbridge, also denied the allegations: ‘This is an organization that is committed to inclusivity and is proud to have earned the Rainbow Tick certification. This is what makes these allegations particularly distressing.

‘Given the serious nature of these allegations I will be meeting with the team management and players on their return to Christchurch, however I am confident in the account that we have received from the team and the security adviser who was present.’

Gay Star News has contacted Paterimos and Crusaders for further comment. However, neither responded in time for publication.

The official Crusaders rugby team Instagram reached out to Paterimos via direct messages. They asked if Paterimos would like to give any further evidence before the CEO meeting with the team. 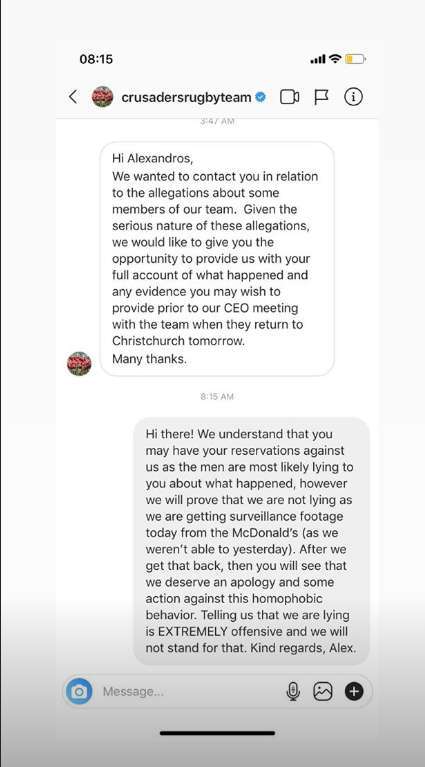 Paterimos replied, saying they will be access McDonald’s CCTV as proof, adding: ‘Telling us that we are lying is EXTREMELY offensive and we will not stand for that.’

The Crusaders are now in Christchurch, New Zealand. They visited South Africa to play a match with the Stormers at Newlands, where they drew 19-19.