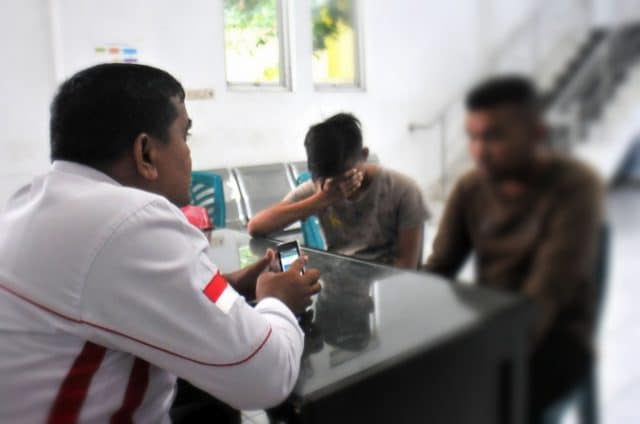 Two men were arrested in the Indonesian province of Aceh under the accusation they were gay and in a relationship.

Neighbours reported the two students who said they had been acting ‘lovey-dovey’ for about three months.

Police raided a rental home last week and alleged they caught the men while they were having sex. The police also said they found condoms in the home which proved the mens homosexuality.

If convicted the men could face a punishment of up to 100 lashes, pay a maximum fine of 1000 ounces of pure gold or 100 months in jail.

It is the first time someone was arrested for violating Article 63 (1) of the 2014 Qanun Jinayat.

Introduced in 2014, Qanun Jinayat is a strict Islamic Sharia Law code unique to the Aceh province. Aceh is the only Indonesian province that can legally adopt by-laws derived from Sharia due to a ‘Special Status‘ agreement brokered in 1999.

Article 63 (1) outlaws same-sex relations between people.
Indonesia’s Institute for Criminal Justice Reform (ICJR) has slammed the Qanun Jinayat arguing it could provoke discrimination and over-criminalization of LGBTI communities and other vulnerable groups.

‘The state has gone too far by interfering on the private affairs of its citizens and making their personal matters a public affair,’ the ICJR said in a statement.

‘This will eventually lead to discrimination and injustice against vulnerable groups, including LGBT [lesbian,gay,bisexual,transgender] communities.’

The ICJR said the introduction of Qanun Jinayat in Aceh was regretful. The laws could increase the stigmatization of LGBTI people in the province,

‘It has intervened the rights and privacy of citizens. The LGBT community in Aceh will continue to be the target of arrests taking place in their private space.’