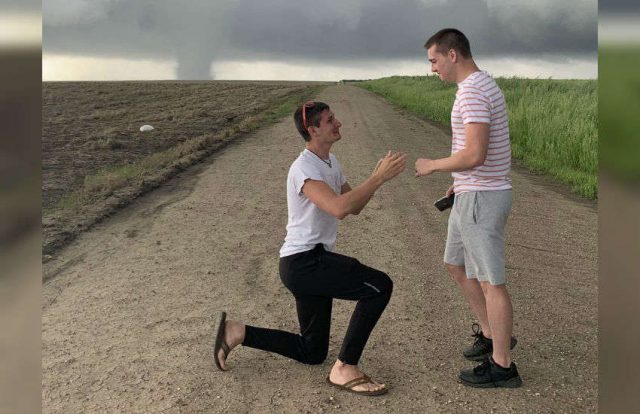 A US meteorologist who asked his boyfriend to marry him on Tuesday has seen his subsequent proposal photo go viral. He gets down on one knee to propose while a tornado looms in the background.

Joey Krastel, 27, is a meteorologist and risk analyst for the Maryland Emergency Management Agency. Explaining the viral photo to  he says he’s been fascinated with natural disasters and extreme weather conditions after seeing his first tornado at the age of four.

He since become a ‘storm chaser’, and says he’s chased around 70 storms. In fact, it was his passion for storms that brought him and his partner, Chris Scott, 23, together.

Krastel and Scott first became acquainted with one another over Instagram. Scott shares Krastel’s interest in extreme weather conditions, and he reached out to the meteorologist after seeing him post photos of storms on the platform.

The rest, as they say, is history. The two now go out chasing storms together.

Krastel told NBC that when they heard about a tornado brewing on Tuesday, he decided the time was right.

‘I felt like it would be this perfect way to seal the deal.’

Krastel, Scott and two friends set off to chase down the tornado in Kansas. They followed the storm to Tipton. It was there that Krastel got down on one knee. However, they couldn’t hang around too long: the tornado was moving towards them.

‘I called to my friends to get back in the car,’ Krastel said.

‘I was just so emotional just because it was my happiest place, being with him next to the storms.’

The meteorologist was keen to point out he has experience with storms, and one should always be careful.

‘People need to listen to the warnings and listen to the National Weather Service and their local meteorologists. They know what they’re talking about and their only goal is to save you.’

There have been no fatalities associated with the Kansas tornado, although at least 15 people suffered storm-related injuries.

Krastel’s tweet about his proposal has been liked over 10k times since he posted it late Tuesday.

Gay Star News has reached out to Krastel for further comment.