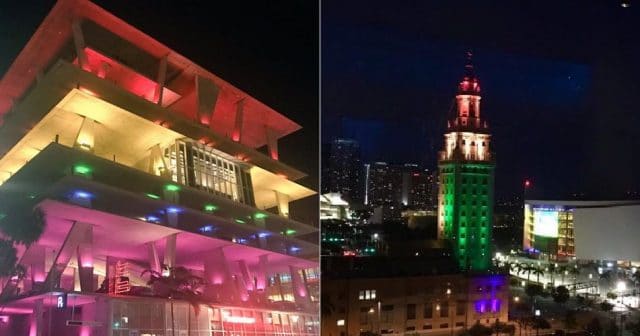 Love shines brighter than ever.

Miami Pride took place this weekend with a typical explosion of noise, colour, and fabulous-ness, but this year’s event was marked by a more sombre start than usual.

The city’s three-day Pride event began on Thursday night (April 6) with an emotional event to mark to last June’s tragic events just 200 miles away in Orlando, where 49 LGBT people and allies lost their lives when gunman Omar Mateen opened fire on crowds at Pulse nightclub.

Miami buildings stood tall throughout the night as they were lit up in rainbow colours in a bright but silent tribute to victims and survivors, as well as their friends and families.

The lights at Lincoln Road were turned on by Pulse survivor Mario Perez, a Miami local who had travelled to Orlando with 12 friends on the night of June 12 last year.

Tragically, only 10 members of the group returned home.

“Two of my friends passed away, Amanda and Mercedes,” Perez told CBS Miami. “I have their picture next to my bed. I wake up to them and I go to sleep to them every day.”

He added: “This is the world to me because they’re not here and I’m their voice.”

Following the emotional switch-on, Perez called on the LGBT community to come together

Fantastic view of the Freedom Tower in rainbow colors for the "Pride Lights The Night" tribute to the Pulse victims and the #LGBT community pic.twitter.com/pRpuwC6W6A

Until April 9, our building will light up in the colors of the rainbow flag as we join the Pride Lights the Night tribute to PULSE victims. pic.twitter.com/YbyIPQ82NX