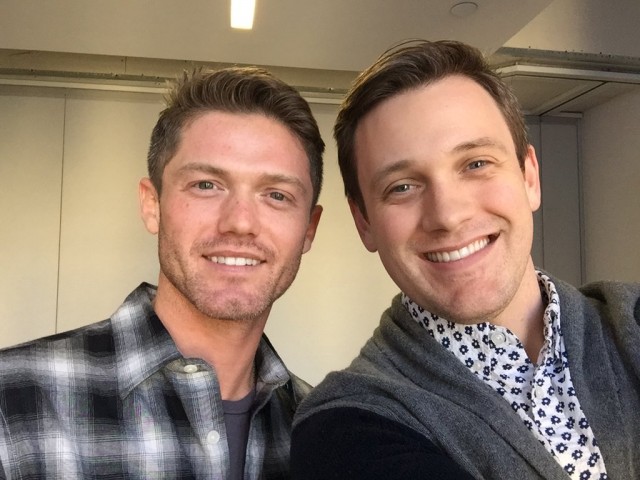 Love is love and love is equal. Love is also wonderful and has its own way through people’s lives. Michael and Andy know best from their experience.

Andy Mientus and Michael Arden met through their careers on Broadway, first as friends. Andy was not into men at the time and at first, the two of them were just friends. A straight guy and a gay guy. Tell us now not to hope that our straight crush is impossible to have.

So,when they met back in 2006, Andy was actually chasing a girl.

“I’d not had any kind of romantic situation with a boy. I was actually chasing a girl around the party that I wanted to ask out. I was looking forward to meeting Michael, but he was very busy—he was the star of the show and I was just with my friends being silly. I remember when we were leaving Michael flagged me down. We both said hey and I have a very vivd memory of that moment.”

Andy had a feeling that Michael was about to be important in his life, yet he did not think he would marry him, which he did.

“Even if I didn’t know we were going to end up together and get married, I could tell that this was a person who would be significant in my life.”

Michael recalls that he was rather busy with a show, and a relationship was the last thing on his mind. Asked about how they have maintained the connection, Andy replied that during five years they kept in touch through Friendster, Myspace and other platforms, just as buddies.

“We both led separate lives and I had another long-term relationship and so did he, but we were friends through all of that. We both found each other again in person when I was doing Pippin for Deaf West in Los Angeles and Andy was in the first national tour of Spring Awakening. We were basically across a hallway from one another,” Michael recalls.

Magic happened while both of them split up with their partners. Michael broken up with his boyfriend and Andy ended the relationship he was having with a girl.

Michael could not believe, and he replied “I like you too” but Andy said “No, I think I want to kiss you.”

That is when their relationship started and they’ve been together ever since. Michael and Andy love each other as people and as artists. Andy was a late bloomer and he found out his true colors at the same time when he found Michael.

“I was not a sexualized young person. I’m still super into video games and nerdy things. But I wasn’t trying to date until I was a little older, and then all of my formative romantic experiences were with girls.

Until he found Michael he did not know if he was attracted to guys or he was just admiring them.

“I never pined for any of my male friends. There were times when I recognized I was attracted to guys at school or guys in the media, but I honestly thought I was just kind of progressive and cool. I think it’s a fine line between desire and envy. Do I want that guy or do I want to be that guy? It’s hard for some people to know the difference. After meeting Michael, I didn’t have any doubt about it,” Andy said.