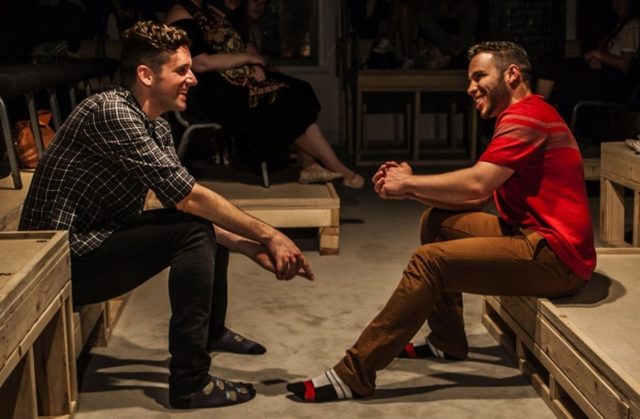 “Our friendship involves a lot of me laughing at him and trying to make him laugh.”

Michael Urie is a busy man: His off-Broadway run in Homos, Or Everyone in America recently wrapped its debut run, his performance in the acclaimed one-man show Buyer and Cellar just aired on PBS, and he’s directing friend and fellow comedian Drew Droege in Bright Colors And Bold Patterns at the Barrow Street Theater.

How does he keep all these plates spinning? “Well I like being busy—and when it rains it pours,” Urie tells NewNowNext. “I am always more productive when I have a lot on my plate, and when opportunities are too good to pass up, I don’t!”

In Homos, written by Jordan Seavey, Urie is paired with Robin De Jesús, playing two nameless gay men whose relationship unfolds through the course of conversations shared in non-chronological order. “The title, Homos, Or Everyone in America, is intentionally suggesting that we are all the same deep down—but the story is about a gay relationship warts and all,” Urie explains. “I have heard from straights and gays alike that they see themselves in the characters, and I think anyone who’s been in a relationship will relate.”

“If you’re a gay man in New York,” he adds, “there are even more ways to see the play as a mirror.”

The show is quite different from Bright Colors, which sees Droege, a frequent guest on Urie’s Cocktails and Classics series on Logo, as the world’s worst wedding guest. How is it mixing business and pleasure?

“Drew is far more easygoing than Gerry, his character in Bright Colors—and more reasonable,” he teases. “In real life, Drew is hysterical like Gerry, though, and our friendship involves a lot of me laughing at him and trying to make him laugh. Which isn’t hard and is always satisfying.” Catch Drew Droege being hysterical in Bright Colors And Bold Patterns, through December 30.