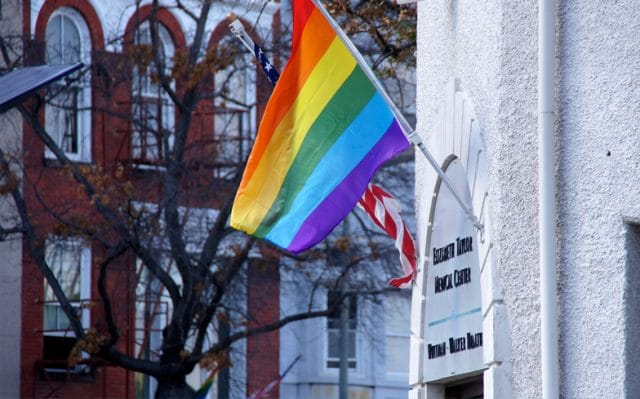 Representative Lynn Afendoulis has announced her intentions to introduce a bill that would mean only the American and the state flag can be flown outside governmental buildings in Michigan.

Her bill is coming after the state’s governor, Gretchen Whitmer, flew the rainbow flag outside of the Romney Office Building for a day during Pride Month.

Afendoulis said it was “inappropriate to promote social policy, even in the form of a flag, on state office buildings.

“We shouldn’t be playing identity politics with the people’s property,” she added. “It isn’t right.”

However, it seems that Governor Whitmer is prepared, as in response she simply tweeted out: “My veto pen is ready.”

Earlier this year, the Tr*mp administration ordered US embassies to stop flying rainbow flags. They said only the American flag should be flown after requests from embassies based in Brazil, Germany, Israel and Latvia.

Richard Grenell, the administration’s most senior openly LGBTQ official, defended the move, saying: “The President’s recognition of Pride Month and his tweet encouraging our decriminalization campaign gives me even more pride to once again march in the Berlin Pride parade, hang a huge banner on the side of the Embassy recognizing our pride, host multiple events at the Embassy and the residence, and fly the gay pride flag.”

The move was also defended by US vice-president Mike Pence. “I’m aware that the state department indicated that on the flag pole of our American embassies that one flag should fly, and that’s the American flag, and I support that,” he told NBC News.

Asked what he would say to LGBTQ people disappointed in the ban, especially after Trump sent a tweet in celebration of Pride Month which takes place throughout June, Pence argued that it was “the right decision” to make.