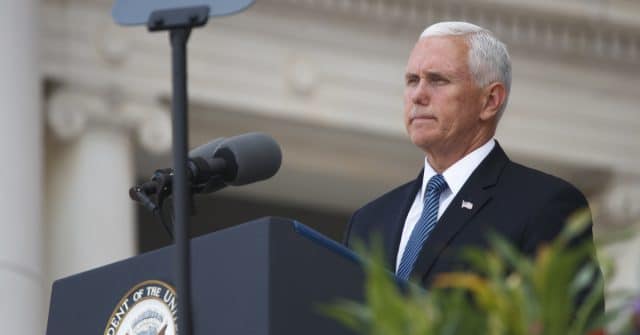 US Vice President Mike Pence has voiced his support for the Trump administration’s decision to reject US embassies’ requests to fly the rainbow flag during Pride month.

Pence also confirmed that at least four US embassies that had requested permission to fly the rainbow flag during Pride month have had their requests rejected.

The State Department said, in response to the requests, that only the US flag should fly outside US embassies around the world. “I support that,” Pence said.

“As the president said on the night we were elected, we’re proud to be able to serve every American,” Pence said, when asked by NBC News about what he would say to the LGBT+ community, which has pointed out the apparent double standard between Trump’s Pride month tweet and the denial of embassies requests to fly rainbow flags.

“We both feel that way very passionately, but when it comes to the American flagpole, and American embassies, and capitals around the world, one American flag flies,” Pence said.

On 31 May, Trump tweeted: “Let us also stand in solidarity with the many LGBT people who live in dozens of countries worldwide that punish, imprison, or even execute individuals on the basis of their sexual orientation.

“My Administration has launched a global campaign to decriminalise homosexuality and invite all nations to join us in this effort!”

But Trump‘s administration reportedly sent out emails to consulates in countries such as Israel, Germany, Latvia and Brazil, stating that the Pride flag was not to be displayed outside their embassies.

Pence said that they had not put any restrictions on rainbow flags flying elsewhere at US embassies during Pride month.

The US embassies in Israel, Germany, Brazil and Latvia were among those who had requested permission to fly the rainbow flag during Pride month.