NEW YORK (Reuters) – Millions lined the streets of New York on Sunday to wave rainbow flags, celebrate the movement toward LGBTQ equality and renew calls for action in what organizers billed as the largest gay pride celebration in history.

Some 150,000 parade marchers and an estimated 4 million spectators commemorated the 50th anniversary of the Stonewall uprising that triggered the modern LGBTQ movement, with corporate sponsorship and police protection that would have been unthinkable half a century ago.

Similar parades were being held around the world, with celebratory events in liberal democracies and growing fights for equality in other places.

North Macedonia held its first gay pride march on Saturday. In Singapore, marchers called for scrapping a law banning gay sex. In Turkey, members of Istanbul’s gay and transgender community gathered for a small rally that ended with tear gas and rubber bullets on Sunday after their annual march was banned for the fifth consecutive year.

“It’s hard for us today, but can you even imagine what some of these people went through in the past? There’s no way to thank them other than to express ourselves fully, truly and wholeheartedly, and to lift each other up while we do it,” said Josh Greenblatt, 25, an actor wearing red sunglasses, a white crop top, ripped jeans and gold-heeled boots at the New York event.Greenblatt said he found his outlandish outfit “empowering,” and he had plenty of competition from revelers stripping down to the barest of essentials and celebrating New York’s legalization of toplessness for women. One woman wore a skintight rainbow dress with a rainbow afro about 2 feet (60 cm) high. A shirtless man sporting rainbow-colored wings and high white platform shoes strutted up Broadway. Rainbow onesie leotards were popular, and there were plenty of colorful wigs, patent leather, fishnets and bright makeup.

‘STILL A LOT OF WORK AHEAD’

The world’s marquee gay pride parade was preceded on Sunday by a protest march by thousands of anti-corporate dissidents who rejected a uniformed police presence and commercial sponsorship, while demanding LGBTQ equality.

The Queer Liberation March aimed to call attention to the killing of black trans women, protest U.S. detentions of migrant children and oppose actions by U.S. President Donald Trump’s administration to curtail the rights of lesbian, gay, bisexual, transgender and other queer people.

They marched behind a banner reading: “We Resist” and hoisted signs with statements such as “My trans pride is not business marketing” and “Decolonize Pride.”

Some also paused to consider the state of LGBTQ rights under Trump, who has banned transgender people in the military, cut HIV/AIDS research and supported so-called religious freedom initiatives to curb LGBTQ protections.

The White House says Trump has long advocated LGBTQ equality, noting that he became this year the first Republican president to recognize Pride Month and backed a global campaign to decriminalize homosexuality.

“There’s still a lot of work ahead,” said Damian Otwinowski, 40, from London. “I don’t think it’s as equal as we think it is.”

In the early morning hours of June 28, 1969, police raided New York’s Stonewall Inn, ostensibly to shut down a Mafia-owned establishment selling watered-down liquor without a license. But the raid followed a series of others at gay bars in the Greenwich Village neighborhood, and the patrons fought back, forcing police to barricade themselves inside.

That touched off several nights of riots and the birth of a movement.

New York was designated the site of World Pride this year, drawing an estimated 4 million people to the city, where straight allies joined LGBTQ people in defending civil rights.

At the Disco Mass at St. Marks Church, dance and pop hits from Diana Ross, Justin Timberlake and Pharrell Williams were mixed with traditional Episcopal and gospel hymns in the theme of inclusion and freedom. 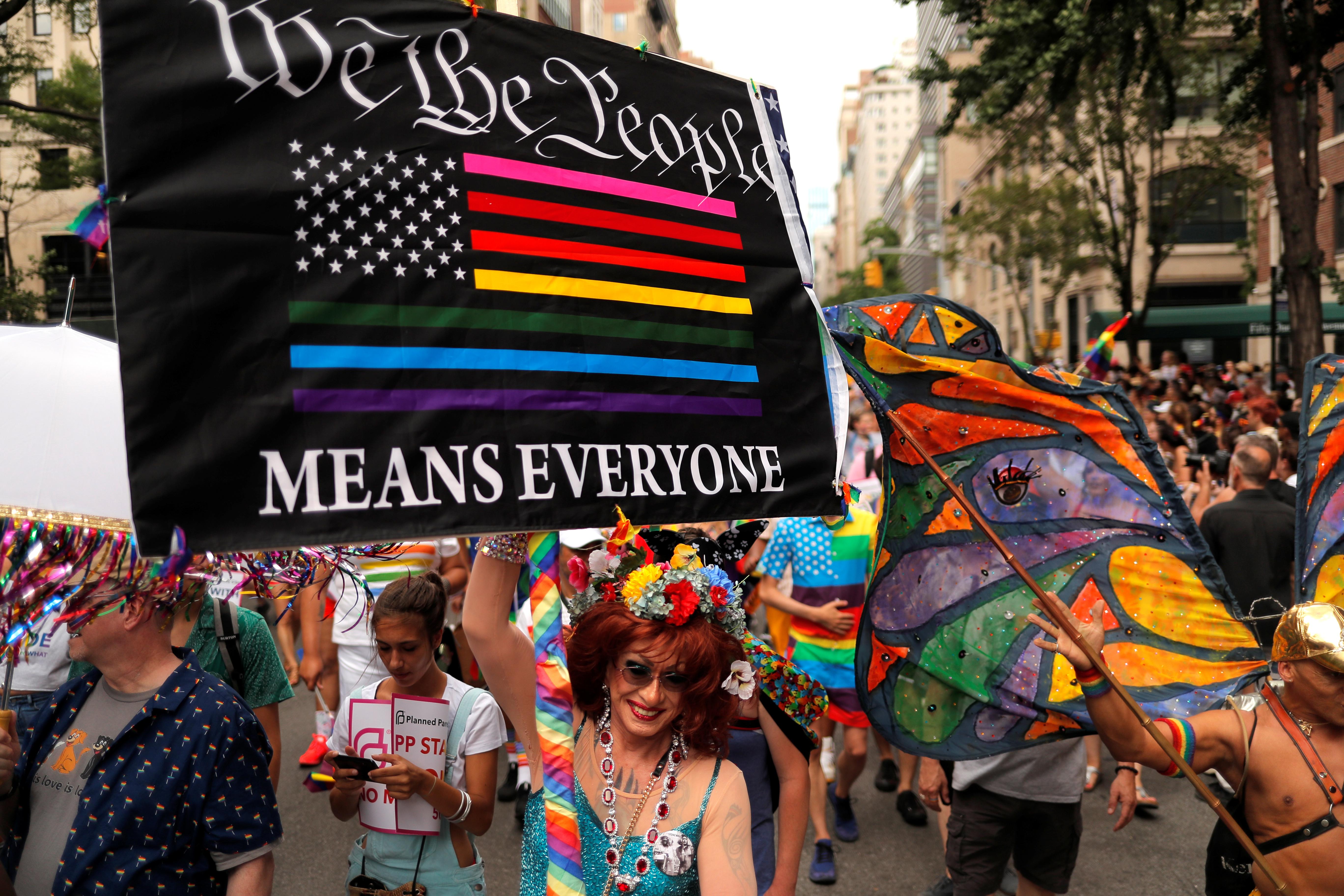 Mary Glasspool, assistant bishop of the New York Diocese of the U.S. Episcopal Church, said all its churches in Manhattan opened their doors for visitors from across the world.

“We want to show them this is a safe space and God loves everyone,” Glasspool said. “Today, it is about love.”