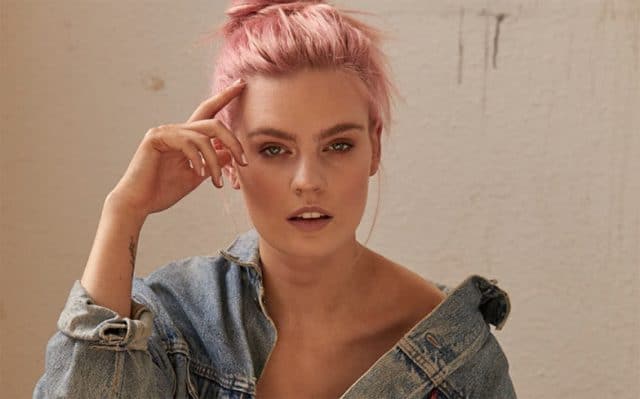 While previous generations of pop stars have waited until later in their career to come out as part of the LGBTQ community – largely down to a lack of acceptance from society – we’re seeing more and more young singers being open from the start.

“It’s important to know that it’s not an issue within yourself, it’s other people who need to change, and the only way that we can allow that to happen is by being open ourselves,” Milly tells us of her decision to not hide her sexuality in her career.

On first listen, her infectious new single Boys R Drugs could easily pass for an angsty, heterosexual breakup song, as she warns the listener that “boys will make you sad” and “drive you mad” with their addictive qualities over crashing production.

But watch the music video, and that message is thoroughly queered – after taunting an unfaithful male love interest, the singer’s real-life girlfriend joins her for a make-out session as glitter rains from the sky. #20BiTeen is real, y’all.

We spoke to Milly about her musical inspirations, how her “vivid” imagination helps her when songwriting, and why Katy Perry’s controversial track I Kissed A Girl helped her discover her bisexuality.

Where did the inspiration for Boys R Drugs come from?
It came from a place of always listening to your friends talk about boys. I’ve got a lot of straight friends, so I kind of like that it’s ironic in that sense, ’cause obviously I have a girlfriend myself, and I’ve always been more into girls. I don’t wanna say it’s taking the piss out of that, but just putting a twist on it.

A lot of artists like to keep their personal lives separate from their work, but you went ahead and featured your girlfriend in the music video. Was there any hesitation about doing that?
Not really, I’ve kind of held back in the past, but I just thought there’s not really a need to. I’m completely happy about my situation so if anyone sees that, then good for them, you know?

It feels like there’s a whole new generation of artists who are choosing to be open about their sexuality from the start, rather than having a big coming out moment later in their career. Was that important for you?
It wasn’t necessarily important, I think it’s just because that’s what’s going on in my real life and I just want to be real with people and be able to do my own thing, and I want it to come across in my music that I’m just listening to myself at this point. I feel like it’s important, especially in the music industry, to not get caught up in what other people are doing or saying. If it feels right to you, just go ahead and do it.

Of course. But on the other hand, do you also think there’s an importance in being open about who you are because there are people out there who might relate to you?
Oh yeah, 100%. I think as well, because I’m bisexual, a lot of people don’t take it seriously. You still get people that are like, ‘Oh, so you’re greedy then?’ I cannot tell you how much that infuriates me! I’m just like, ‘Yep, that’s me, so greedy, just can’t help myself.’ [Laughs] No, but I would love it if someone could relate and know that it’s not just the music, but also how I’m open. That would be a great thing to know.

It does seem like there’s still a stigma attached to bisexual people, and the misconception that bisexuality is a stepping stone to being either gay or straight…
Yeah, and even now I find myself saying, because people don’t think I look like I would have a girlfriend – I know that you can’t tell – but I’ve even found myself saying ‘my partner’ because I’m scared to say ‘my girlfriend’ to members of the public, taxi drivers, whoever. So they’re like, ‘How’s your boyfriend?’ And I’m like, ‘She’s good!’ And then you have that awkward silence afterwards [Laughs]. I just think everyone should be more accepting. It’s important to know that it’s not an issue within yourself, it’s other people who need to change, and the only way that we can allow that to happen is by being open ourselves. 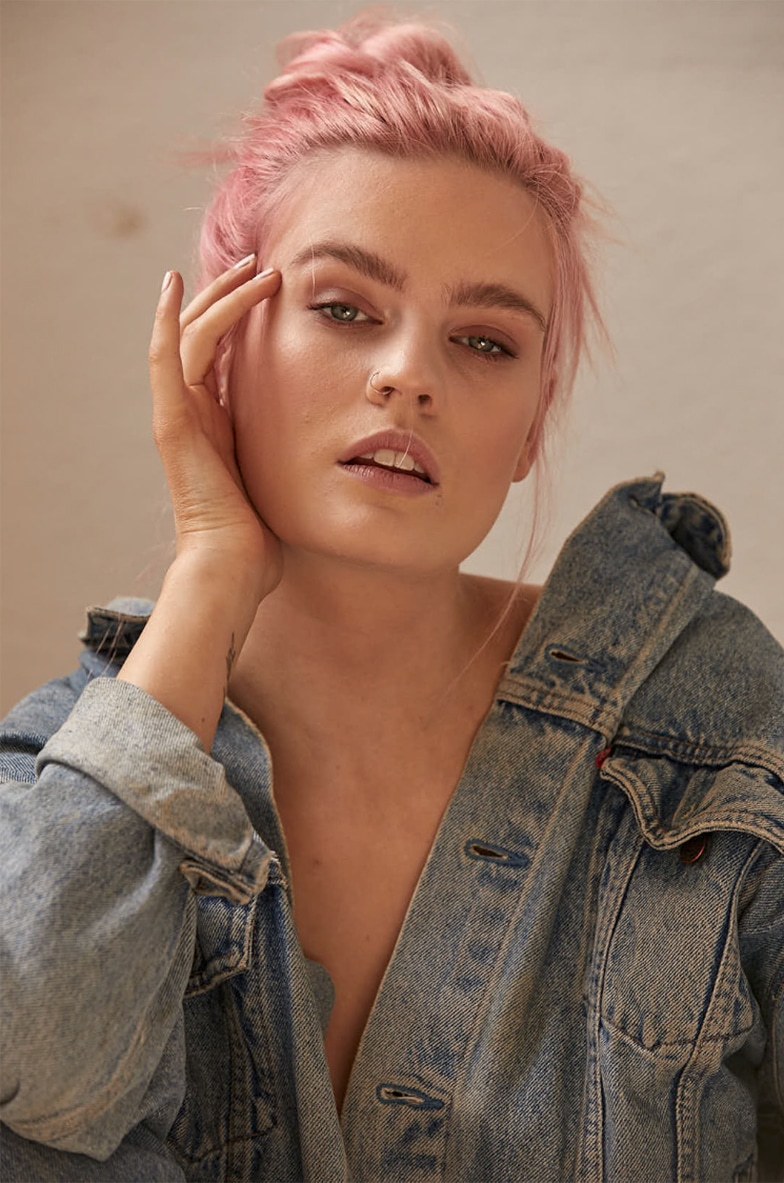 When you were growing up, did you feel like you saw a lot of bisexual representation in the media?
I didn’t, and I didn’t know I was bisexual until I was about 15, which I guess is kind of late compared to some people. I remember the first thing I ever saw was Katy Perry’s I Kissed A Girl, and I was like, ‘What? A girl can kiss a girl? That’s okay?’ Because I didn’t understand that you could do that. And I remember going through this massive thought process where my brain was in overdrive, and I was like, ‘Oh my gosh, what am I?’ And even though I was young when that came out, I was absolutely mind blown that this was a thing. And so I was intrigued at a young age, but I didn’t know for sure until I was a bit older. So no, I guess there wasn’t enough representation.

It’s interesting that you bring up that song, because looking back on it now, a lot of people find it to be a fetishisation of bisexuality, especially coming from a straight woman.
Well, it’s almost symbolic for me, because I remember that song being such a huge deal in my life. So even though I didn’t know I was bisexual at the time – I was only a kid – I think it’s great. And yeah, she’s straight, but she’s still sending that message that it’s fine for girls to kiss girls. And if she’s straight and wants to kiss girls, that’s fine as well. She’s not saying, ‘I’m bisexual’. I think it’s just fun. It’s a fun song with a fun video, and I’ve always been a fan of hers.

A lot of queer artists tend to go for that pure pop sound, but yours is a little more rock-influenced. Do you think it’s important that queer artists aren’t boxed into a certain sound?
Oh yeah, definitely. Even with camp artists like David Bowie – again, it’s like the Katy Perry situation, it’s not to say they have to be gay or bi or whatever – it’s showing that you don’t always have to be pop and you don’t always have to be put in this little glass box for the world to see. You can be whatever you want to be. A lot of the world’s most well-known artists have been that way, they’ve created something completely new and people have accepted that because they’re such legends.

Going back in time, when did you first discover your love for music?
Well, I sang before I could speak, so I don’t actually know. I feel like it’s like it’s just built into me. I’ve always resonated and connected with music. Growing up, my mum and dad used to listen to Cat Stevens, Bob Dylan, The Beatles, Pink Floyd, and I remember understanding lyrics from a very young age and being able to have my own take on them. I like people being able to get their own take on my songs and seeing them from different angles. There doesn’t always have to be just one meaning. 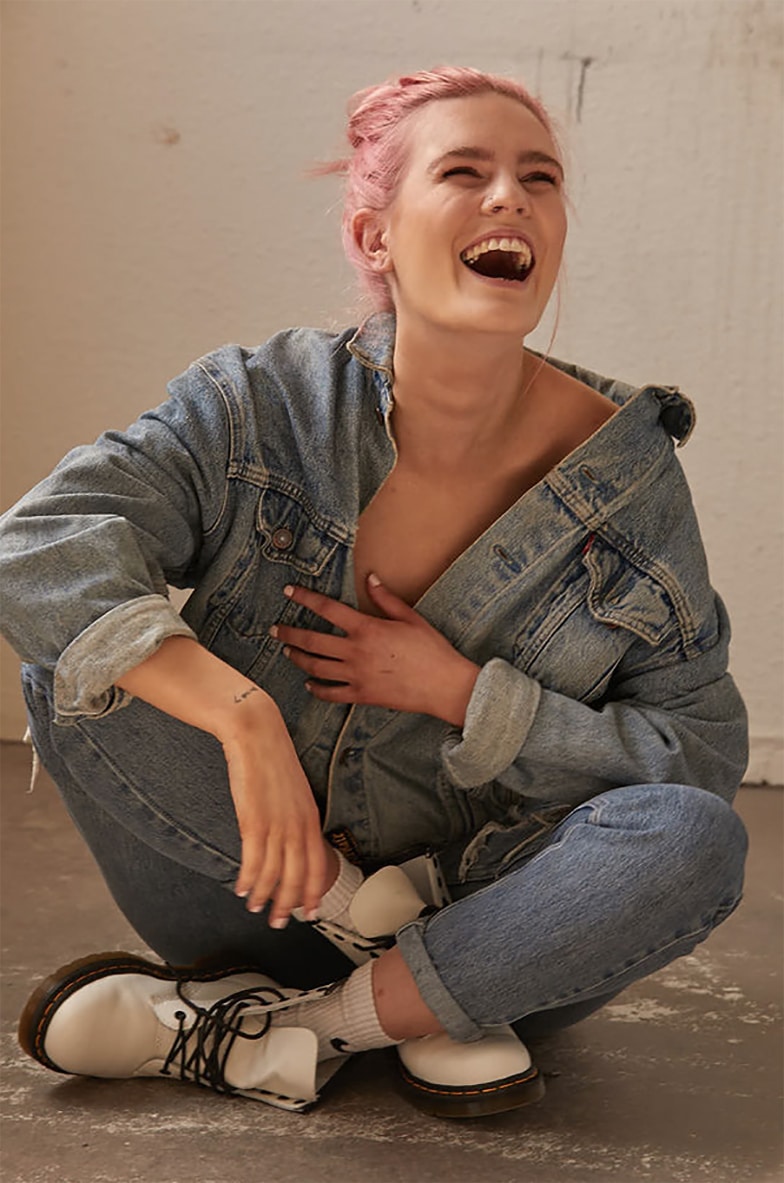 Where do you get your inspiration from when you’re writing songs?
Sometimes I’ll put myself in someone else’s shoes, or I’ll imagine that I’m in a situation that I’ll never be in, because I have a pretty vivid imagination. Like, if you’re at a standstill in your life, you’re not gonna just write about walking your dog in the morning, so I often just use my imagination or I’ll read about other people’s lives. I get inspiration from everywhere. Sometimes if I’m in a studio and I hear a track, it just comes out and it feels natural. I never really question it.

And who are some of your biggest musical inspirations?
I’ve always been a huge fan of Amy Winehouse, and Bob Dylan for his writing and because I grew up on that, but at the moment I think Billie Eilish’s new album is sick, and she’s such an inspiration at such a young age as well, like what the hell? I know everyone loves it, but I cannot get over it. Also for stage reasons, Blondie and Florence and the Machine, all those powerful women. I’m just like, ‘Yes, girls!’

What can we expect in the future from you?
I’m just busy writing 24/7 at the moment, I’ve got some really nice songs lined up and I’m excited to make music, sing and perform, and do nothing but that for the foreseeable future. I’m not gonna stop!