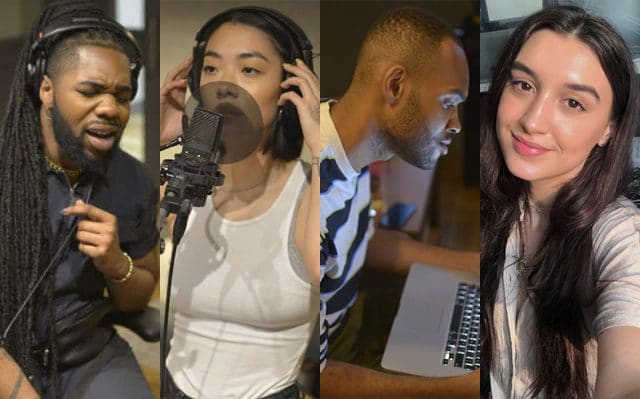 GAY TIMES were invited down to Warner Chappel Studios to get an insight into the camp, as well as conduct a roundtable discussion with four of the talented artists in attendance: MNEK, Rina Sawayama, Ryan Ashley and Caitlyn Scarlett.

Together, they discussed whether LGBTQ artists have a duty to talk about their identity and relationships in their music, if ‘queer-baiting’ from artists like Katy Perry and Christina Aguilera is always a bad thing, and the importance of safe spaces.

Rina: Well, we were just talking about this in the other room. You’d be surprised that this stuff doesn’t really happen often, where you get everybody in one space that’s queer and it’s like this creative melting pot.

Ryan: I don’t know if it’s happened at all.

Rina: No, I’ve never heard of it. When Uzo said we’re going to do this, I thought it was just such a cool idea.

Ryan: Is this the first ever queer writing camp?

MNEK: Well, maybe here, in this country. I don’t want to claim it, that’s the thing. You know some people start claiming that they were the first to do something and then they get showed up. 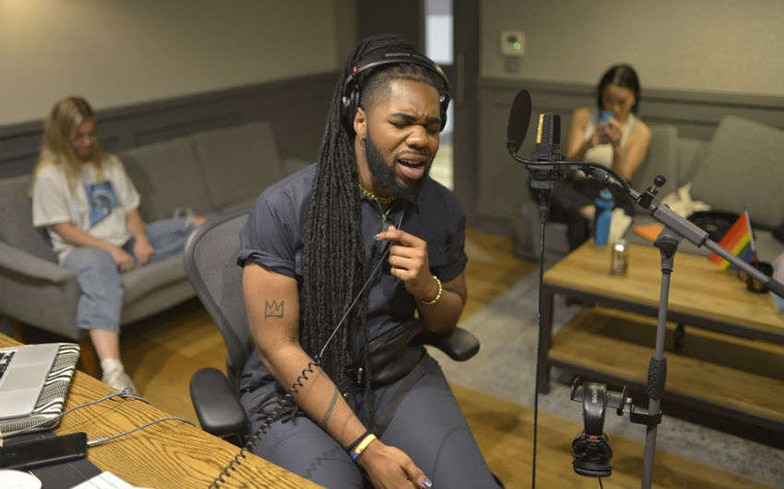 Rina: We wrote a cute little duet which was so subversive that we got confused. It was a bisexual woman and gay man and a gay woman writing a song about their love interest. We were like, ‘What pronouns do we use? Who are we talking about?’ [Laughs]

MNEK: But it was super fun.

Rina: It was really fun! Our brains were really working overtime, but it’s really cute. It’s about trying to break out of that heteronormative mould that’s in your head, where you’re talking about the opposite sex all the time, because that’s what most songs are about.

Rina: It’s getting there, yeah, for sure.

Ryan: I don’t think they’re ready, but they should ready.

Rina: It’s down to the young generation. Only 36% of Gen Z identify as straight, or something like that.

Ryan: One day everyone will be LGBTQ.

Caitlyn: I think teenage angst is a big part of every musician, but you have twice as much when you’re LGBTQ, the whole growing up experience comes with extra twists and turns, so you’re forced to accept yourself and face certain realities a lot earlier. So I think it kind of moulds you into some bombastic, creative creature.

Rina: Being LGBTQ used to be really taboo – and it still is, in some circles – so when you’re already taboo, nothing is really off limits for you. So I think it really opens up what you’re willing to talk about in your songs.

Rina: Mainly the sexuality side, because even using same-sex pronouns in songwriting is still taboo. I mean sex, too, I guess. Anything that’s not hetero sex.

MNEK: It’s very taboo in the gay world as far as people talking about it in their songs. People feel very uncomfortable with that.

Caitlyn: It’s about self-belief, isn’t it? It’s the combination of your self-belief as a songwriter, and the great melody and the chords. No matter what the politics of the lyrics might be, if it’s a good song then it’s a good song. You have to go with that belief.

Ryan: I don’t think we need to be as conscious about using our pronouns in music because we grew up singing everyone else’s pronouns. If people like the song, they like song, whether it’s a guy talking about a guy or a girl talking about a girl.

MNEK: Sometimes you’re like, ‘Okay, well, did this to me. If we’re going to get into it, we’ll get the way into it.’ But then other times you can just let everyone relate to the song. 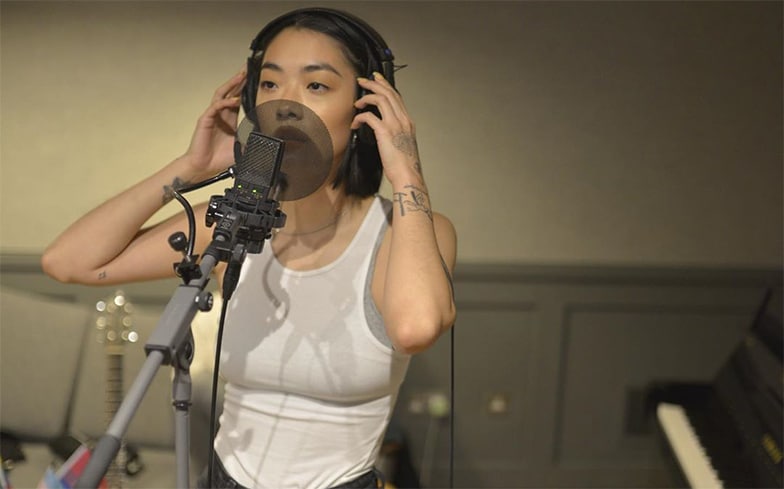 Ryan: No, not that I can think of.

Caitlyn: I think Bowie was a big one for me.

Rina: Christine and the Queens is now my ultimate crush. I can’t even deal.

Caitlyn: When Girlfriend came out, I was like, ‘These lyrics!’ I relate so much.

Rina: It was some sort of celebration, which at the time no one had really seen, so it was valuable for that moment. But times have come a long way now.

Ryan: Are any of them queer?

Caitlyn: I don’t think so. I think it was just pretend.

MNEK: But they all separately have done things for the gay community and are gay icons. Madonna especially, credit where credit’s due. She’s absolutely done so much. And Christina, of course. But Madonna really set the blueprint. Not to be like white saviour or anything, but more so the white blonde pop star who fought for equality, and fought for equal rights for everyone.

Ryan: In her interviews, as well, not just in her songs.

Rina: Yeah, and she was so bold about HIV when it was so ‘not okay’ to be talking about it. So credit where credit’s due. But it’s kind of similar when people talk about straight allies headlining Pride, I think it’s so subjective that it’s hard to give a definitive answer. Some people might listen to that song Girls [by Rita Ora, Charli XCX, Bebe Rexha and Cardi B] and be like, ‘Oh great, I feel seen’, right? But then some other people are like, ‘Ugh, that’s queer baiting’. So I think it’s important to respect that it will mean different things to different people. Maybe a straight person will go to see Ariana Grande at Manchester Pride with a queer friend, and then they’re going to become more of an ally and fight for you, it might cause a chain effect. So I used to be a bit like, ‘Argh’, but now I’m a bit more, ‘It is what it is’.

Rina: One time I was in an all-female writing camp and we realised that there was about eight of us in the room, like engineers, vocal producers and producers, and all of us were queer. That was amazing. I was like, ‘When has that ever happened? All queer women in the same room writing together?’ So we wrote a song about it. We haven’t finished it, but… [Laughs]

Ryan: I just enjoy working with my friends, really and truly. Because you always know that even if you don’t get anything out of it, you’re always going to have a good time. They’re generally my most enjoyable writing experiences. 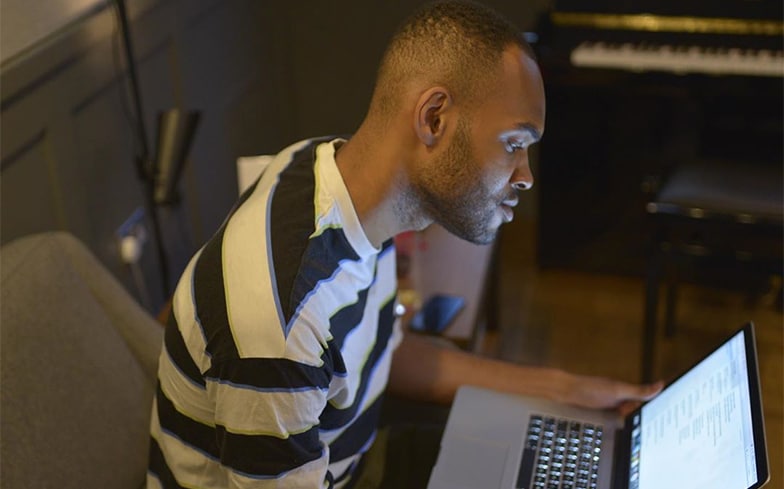 Ryan: We’re not allowed to forget about that. We’re reminded of that everyday, sadly.

Caitlyn: I went to musical theatre school, so everyone was just fabulous and then I went to a normal school and I was just like, ‘Oh wow, it’s a harsh world’. You can sometimes get caught in a bubble – and it’s such a lovely bubble – and then something will happen that jumps you and you remember that the whole world isn’t like that yet.

MNEK: I guess it’s tough because we really can’t escape it. Especially as a black person anyway, regardless of the LGBTQ part, there’s so much systemic racism everywhere we go and in everything that we do. I can’t open Twitter without seeing something telling me, ‘You’re not shit in this country’. A white person’s going to do this, and take that away from you, and you can’t do shit about it. It sucks, but then like you said, these bubbles are nice, we create them so we can have safe spaces, have nice spaces, have time that we can make our music and not be too jaded by the outside. This is an escape for all of us, we’ve all been through stuff and we’ve always found music as a solace and as a place to go to escape.

MNEK: Well, only someone with privilege would say that. Only someone who’s never felt unsafe would ask why there needs to be safe spaces.

Caitlyn: It’s a sense of community, isn’t it? Everybody needs that in their life. The guys who might criticise, ‘Why do you need a safe space, that’s snowflake stuff’, it’s like, ‘Well why do you need to go to the pub every Friday with the lads and talk about football?’ It’s community, it’s who you are, it’s what you’re into and you want to feel like it’s okay to be yourself. It’s the exact same concept, but people just don’t get it because they’ve not lived it.

Ryan: The pub is a safe space. 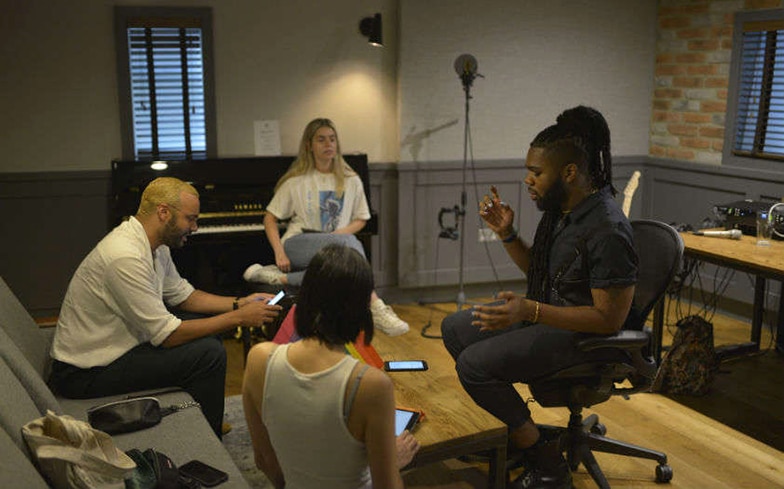 Ryan: I used to write songs about girls.

MNEK: You wrote a song about a girl the first time we worked together!

Rina: When was that!?

Ryan: Oh wow, that takes me back… what was the question, sorry?

Ryan: Yeah, when I was younger. But then you get to a point where it’s like, ‘Well, what’s the point?’ You’re only stopping yourself by doing that. You’re stopping your own growth outside of music as a person. So if you’re going to do it, you need to do it fully.

Rina: I was talking about other stuff I think, like society. I’d use metaphors of society to talk about love.

Caitlyn: I think one thing that we’ve probably both experienced is that when you’re very straight-passing, it has to be a conscious choice if you’re going to be open in your music, because you could get away with not ever doing it. You could just talk about boys your whole life and no one would know. I remember the first few times I started dropping in the odd little thing about my sexuality, and I was very nervous because it’s like, ‘I can’t take that back now, it was smooth sailing until here, maybe someone’s going to have a problem with me or maybe I’m going to ruin someone’s fantasy of me’, when I could have just gotten away with it because I don’t look typically LGBTQ or anything. I remember the first few times I did that, I was like, ‘Oh my dads going to hear that, okay…’

Rina: Yeah, my dad kind of found out [about my sexuality] through interviews.

Ryan: How did that go down, babe?

MNEK: I think it might be a generational thing too, because I’d never have that conversation with my parents either. It’s just not something I could even fathom.

Rina: Yeah, and the coming out experience that’s portrayed in the media is very Western, you know, you sit in front of your parents and you talk about your sexuality…

Rina: Exactly, you post a 45-minute video on YouTube. But yeah, going back to that point, for me I had so much biphobia inside that I was like, ‘Would anyone give a shit if I were to say that I’m bi?’ That was my main thing. ‘No one’s going to give a shit, you’re straight-passing, who the fuck cares?’ But it’s like, bisexuality still needs representation. The biphobia is something that stopped me from coming out as well, so I was trying to get rid of my own preconceptions about bi people and where they belong within the LGBTQ community. It was a weird mix of emotions. I was like, ‘Is this important? This isn’t important. Am I important? I’m not important.’ And that’s something I’m still kind of struggling with a bit.