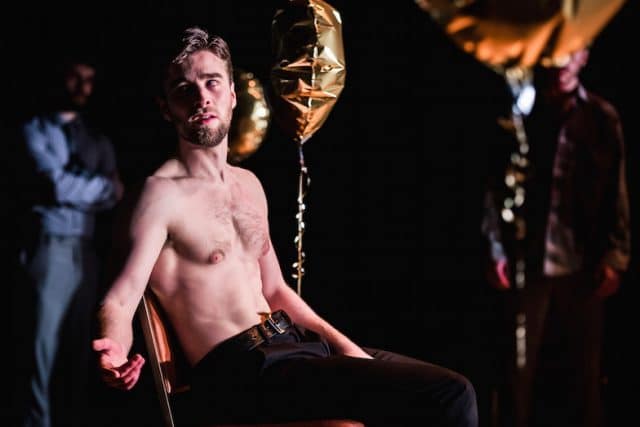 For those unfamiliar, this play focuses on the biblical story of Salomé, stepdaughter (now stepson in this adaptation) of the tetrarch Herod. It is a retelling of the beheading of John the Baptist – the prophet Jokanaan here – which Salomé requests in exchange for performing the dance of the seven veils. Alongside a gender swap in the lead role and setting proceedings in the present day, Lazarus have also split this traditionally one-act play into two halves.

While it’s a reasonably interesting story we felt the material was stretched a little too thinly. It’s a very slow burn to begin with – in fact, most of the first act dragged; we only started to feel truly involved with the events unfurling on stage just before the interval. We’re not quite sure why an interval was introduced – it would have flowed better as a single act. It’s also an incredibly wordy text, full of elaborate language and weighed down by rather too much symbolism – a bit of trimming would not have gone amiss.

There are a handful of strong moments. Most notably, the dance of the seven veils has been reimagined as a striptease in which Salomé gradually removes seven items of clothing. There’s a palpable tension on the stage and the power dynamic between Herod and Salomé is interesting to observe. The staging and lighting is effective for the most part, too, lending the show a cinematic quality at times. However, there were some questionable decisions – the large number of gold balloons was quite distracting and most of them weren’t used in any way.

The quality of the acting was a bit hit and miss, too. We felt that Annemarie Anand as Herod’s wife Herodias was the star of the show, delivering an engaging and multi-layered performance. The other leads were reasonably solid, but many of the supporting cast failed to impress – although in their defence a number weren’t given a great deal to do.

Overall we found this modern adaptation of Salomé to be a mixed bag. It’s an interesting idea but we felt the material was spread too thinly to sustain our interest throughout. There’s some strong acting alongside some less than stellar performances, and smart direction decisions sit next to questionable ones. Some significant editing could have resulted in a punchier and more engaging show, but we found this staging of Salomé to be a little underwhelming.