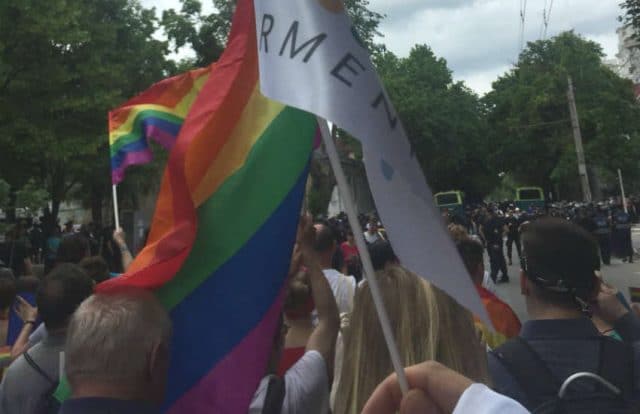 Hundreds marched in Moldova’s Pride parade despite resistance from counter-protesters.

Member of Parliament Dumitru Alaiba was the first politician to openly support the protests, according to Euronews. He said: ‘These marches are an affirmation of our common dignity, of freedoms and rights that we all have.

‘I will go with my family on Sunday at Moldova Pride.’

Around 1000 police officers accompanied the march, fearing violence from counter-protesters. However, this year, no violence occurred between the two groups.

A few dozen counter-protesters organized alongside the march. They held signs demanding the stop of ‘homosexual propaganda’ and ‘It’s not OK to be gay’.

Meanwhile, the president of Moldova, Igor Dodon, encouraged citizens to take part in an anti-LGBTI festival. The Family Festival promotes ‘traditional family values’ and was held in protest against the Pride. The festival is held on the same day.

Attitudes towards LGBTI people in Moldova are not entirely positive. The country mainly follows the Russian Orthodox Church.

Only in 2013 did Moldova repeal its anti-LGBTI ‘propaganda’ law. Similar to the similar Russian law, it prevented the ‘promotion’ of being LGBTI to people under the age of 18.

They did this in order to be granted a European Union Association Agreement, which they were granted the following year. The EU mostly refuses to associate with country’s with bad human rights records.