For at least the third time this year, two male lions have been spotted attempting to mate with each other. But unlike the other encounters, which were observed in animal parks, these felines got frisky in the wild.

Paul Goldstein came across two “impressive alpha males” getting intimate in Kenya’s Masai Mara in August, the same month a lion was spotted mounting another male at Yorkshire Wildlife Park. 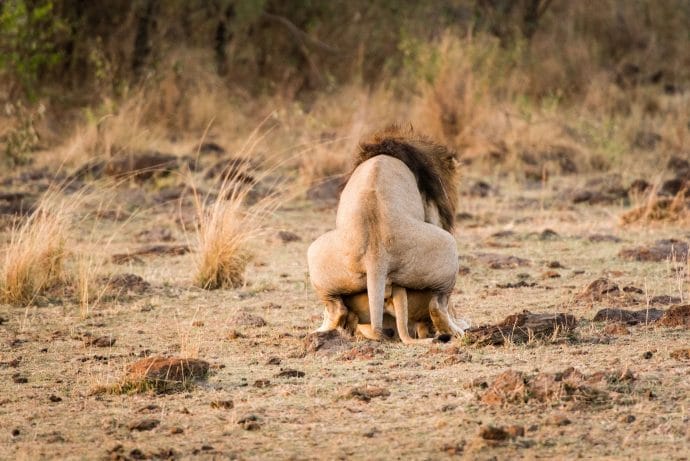 Goldstein, a London-based tour guide, says the two were in perfect symmetry next to each other, before one laid down and the other mounted him.

“When lions mate it normally last a few seconds,” he told the Daily Mail. “These two were at it for over a minute and the obvious affection afterwards was very evident, as opposed to the violent withdrawal when male and female mate.”

Even after the dominant male dismounted, “he did not back off as is normal after mating” Goldstein recalled. “He crept round to the other male’s muzzle, for a nuzzle and threw a conspiratorial wink his way.”

Researchers have theorized the behavior is a way to claim dominance or cement social bonds. Goldstein offered the cats might just have “their feet in both camps.”

“I have heard of this happening in Botswana but with nothing like this vigor, and indeed at various zoos and safari parks. But incarcerated animals will do strange things, who can blame them. This, however, was astonishing, it was impossible not to smile.”

Same-sex sexual encounters have been observed in more than 1,500 species, from sheep, dolphins and giraffes to butterflies and octopi.

“Sexuality is not just about making babies,” Biologist Petter Bockman told the Mail. “It is also about making the flock work.”