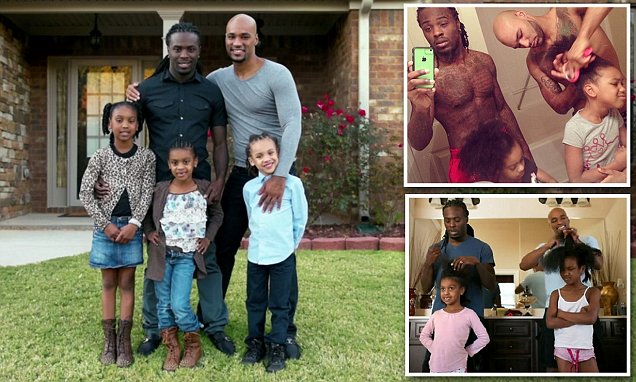 Instagram’s “Hot Gay Dads” Kaleb Anthony, 27, and Kordale Lewis, 26, are “no longer together.”

The news about their break up impressed all the users of the Internet who admired this same-sex couple thinking of them as great dads for their children. It happened in July, 2015.

Dads shared their opinion what is it like to be fathers of four children – two daughters and two sons between the ages of 6 and 8: “Being fathers is getting our daughters up at 5:30 am, making breakfast, getting them dressed for school and putting them on the bus by 6:30.”

And after a period of half a year Instagram’s most famous hot gay dads just announced they’re expecting a new baby.

“After a long time of trying and praying, we’re finally able to announce our pregnancy at 12 weeks!! (WE’RE PREGNANT!!),” the dads-to-be showed the photo of their baby-to-be on their official Instagram account.

The couple of rich dads became Internet celebrities two years ago after posting a photo of them doing morning chores in their bathroom. This photo went viral.

Happy fathers expect their new baby in October. This will be the fifth kid who will join this big family that already consists of six members and three dogs.

As we have mentioned above, last summer, the couple unexpectedly split up. These cheating rumors appeared after Kaleb posted a long Instagram diatribe calling out Kordale’s untoward behavior. Neither of the guys revealed the reason for their split and, thankfully, it was only temporary.

By Christmas 2015 the couple was back together and posted family shots again, saying, “Real love is hard to find. However when you do find it. Hold on to it. Love is not easy, fight for it like hell.”

Our congratulations to the dads-to-be and strong health to the mother who will give birth to their fifth kid!