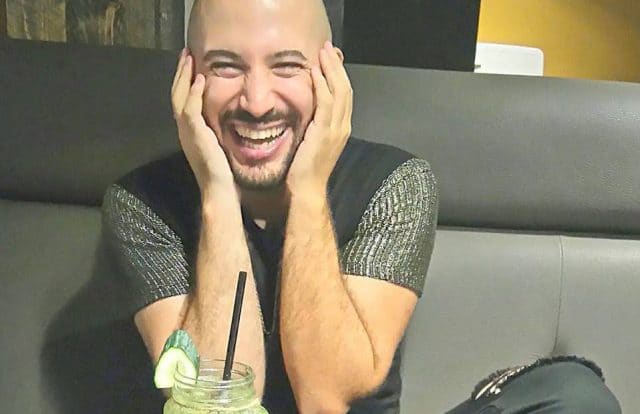 Actor suffered heavy bruising on his head, eyes and neck. His clothes were torn. The men had threatened to kill him

A gay actor and public figure was attacked after a director told fans to rape him.

With a picture of Adouma dressed in a kaftan and head scarf on his post, Frites said he had a ‘solution’ to the spreading problem of homosexuality in Morocco.

He said he ‘does not understand those who rape donkeys, people with special needs, elderly women, babies and children while they’re incapable of raping those who wish to be raped and are willing to give money to whomever is willing to rape them.’

Many of Frites’ supporters agreed with the call for violence.
On 25 August, Adouma said he was on his way back home in Tangier when a group of people publicly assaulted him.

‘I was attacked after [Frites] called on people to rape me,’ Adouma said. ‘He said I am willing to pay money in exchange for being raped!’

The actor suffered heavy bruising on his head, eyes and neck. His clothes were torn. The men had threatened to kill him.

‘Today, I say to you Mr Frites, congratulations,’ Adouma said on Facebook. ‘You have achieved your goal.’

He added: ‘According to your words, you are a director, a fighter, an artist. But you are devoid of humanity, a terrorist in disguise.

‘I demand human rights. I am a person I have feelings, and no one in the world deserves to be raped.

‘If we were in Europe, you would have been punished for calling on people to rape me. It is you that is morally abnormal.’

In a private conversation shared on the internet between Frites and an unknown Facebook user, the film maker claimed his post was ‘misunderstood’. 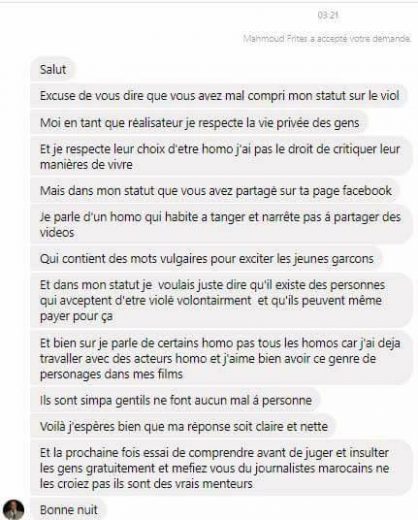 ‘I, as a film maker, respect the private lives of people,’ Frites said, as translated by Moroccan World News.

‘I also respect people’s choices of being homosexual and I understand that I have no right to criticize their ways of life.’

He said he had issues with one gay man, ‘who does not stop making vulgar videos which arouse young boys.’

Frites added he has worked with gay people on his films, and they are ‘nice’.