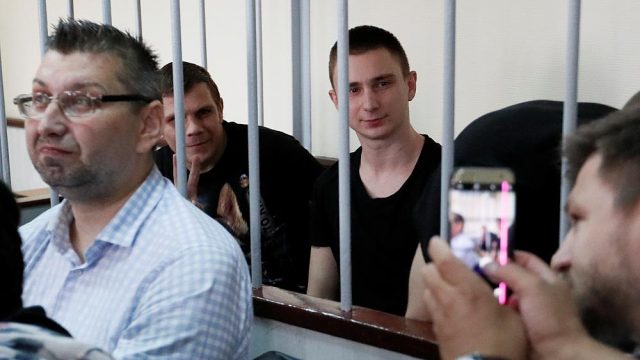 A court in Moscow is set to decide whether to extend their custody.

The two-dozen sailors were detained by the Russian Navy last November in the Kirch Strait, off the Crimean peninsula.

The sailors and three of their navy vessels were fired upon and captured by Russia as they attempted to pass through the Kirch Strait, a narrow stretch of water that separates mainland Russia from the disputed Crimean.

The controversy heightened tensions between the two nations already at loggerheads over Russia’s annexation of Crimea.

Under a 2003 treaty, the strait and the Azov Sea were to be shared by both countries, but Moscow insists that the Ukrainian vessels strayed into Russian waters.

The International Tribunal for the Law of the Sea demanded the sailors’ release in May, but Russia has refused to recognise the organisation’s authority.

Families of the detained have made the long trip to Moscow to support their loved ones during their court appearance, but they were not optimistic.

Irina Budzilo, the wife of midshipman, said they would support their family members no matter what the decision was.

“The only hope is that we will see them, try not to cry when we do and support them,” she said. “We will say the truth will win and they will be returned and everything will be fine. But I don’t believe that I think politicians are using this case.”

Lubov Chuliba, whose son is also one of the 24, said he has remained stoic: “He never complains, he doesn’t cry and doesn’t lose heart.

“He says to me ‘Mum, I am a strong man. I’m proud of how you raised me and gave me a direction in life.’

“This is all a political game.”

Ukraine has said it has negotiated an exchange of prisoners with Russia.

However, with the Kremlin refusing to bow to international pressure, today’s hearing may see the prisoners’ detention period extended further.

Nikolai Polozov, the sailors’ lawyer, has said he doesn’t expect his clients to be freed today: “After the International Tribunal for the Law of the Sea ordered Russia to release the sailors and return them to Ukraine and also to return the three warships, the Russian authorities had no choice.

“Now, in fact, the Russian authorities are searching for a solution by which they can release the sailors and thereby execute the decision of the tribunal but, at the same time, try to save face.

“I hope that the sailors will be home in the near future. All the conditions for their release are in place, but I think it’s unlikely to happen before Ukraine’s parliamentary elections on July 21, but will probably happen straight afterwards.”