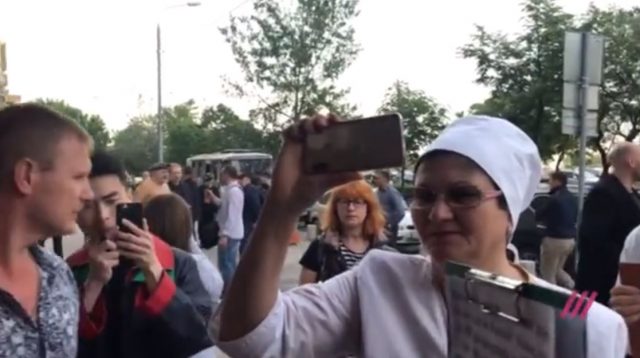 Extremist activists harassed attendees and protested outside of a LGBT+ film festival in Moscow.

Pro-Kremlin activists, believed to be part of two fringe nationalist groups called the National Liberation Movement (NOD) and SERB, protested at the opening night of the Side by Side (bok-o-bok) LGBT International Film Festival in Moscow on Thursday (May 23).

The groups demonstrated outside the Fitil’-Klub in Moskva, which was screening The Miseducation of Cameron Post followed by a Q&A session with writer Emily M Danforth.

Posting on the event’s Facebook page, organisers said: “People stood with posters, with neo-Nazi and extremist symbols, behaved aggressively: they tried to block the entrance to the cinema club, they insulted spectators who came to the screenings.”

The opening night was attended by representatives of the American, Canadian and European embassies. It’s believed ammonia was poured onto an employee of the Canadian Embassy during the protests.

According to Dozhd TV, police eventually detained 10 of the estimated 40 activists but organisers for the Moscow festival believe the police were ineffective in handling the situation and were even calling for the festival to shut down.

“The festival organizers called the police, who watched what was happening but did not interfere with it for 2.5 hours,” the festival said.

“The festival organizers are outraged by the inaction of the police and have already written complaints to the police and the prosecutor’s office. At the moment, the head of the OMVD in the Khamovniki district of the Central Internal Affairs Directorate in the city of Moscow is putting pressure on the site in order to stop the festival. According to the organizers of the festival, these actions are illegal and outrageous.”

A further Facebook post shared by the organisers reported that the police had later taken control of the situation and the event was able to resume.

Emily M Danforth speaking at the Side By Side festival after police had intervened with protesters. (Side by Side LGBT Film Festival/Facebook)

A spokesperson for the Office of the Commissioner for Human Rights in Moscow had previously said they hoped the festival would create a “tangible contribution to the formation of an atmosphere of tolerance and mutual respect and will contribute to the promotion of human rights in Russia.”

The festival continues in Moscow until Sunday (May 26) with screenings of The Happy Prince and Rafiki.

A recent survey found that Russians are more likely to oppose having a LGBT+ neighbour than one from another social group, giving an indication of how the LGBT+ community is treated in the country.