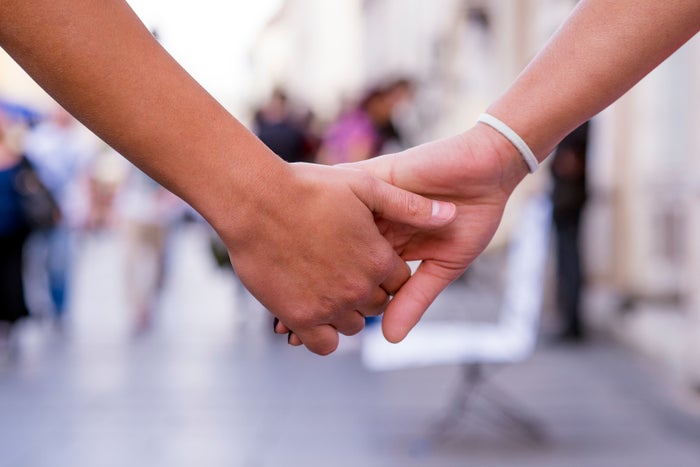 Most LGBTQ Americans fear violence or discrimination if they hold hands with someone of the same gender in public, according to a new survey conducted by Whitman Insight Strategies and BuzzFeed News that found majorities also report having been branded with anti-LGBTQ slurs and offensive comments.

The Pride Month poll found that despite winning incremental rights, 9 out of 10 LGBTQ people in the United States think discrimination endures — particularly against transgender people — and many report personally facing bias in housing, restaurants, workplaces, and stores.

The LGBTQ community has its own problems with discrimination, the respondents said, including sexism (51%), racism (52%), and anti-transgender discrimination (60%). Two-thirds of gay men say they’d never consider dating a transgender person.

The poll also tapped into the ceaseless debate about bachelorette parties in gay bars — which some see as a screeching, heterosexual incursion — but just one-quarter of LGBTQ people believe the revelers should be banned. Slightly fewer gay men and lesbians support a bachelorette ban (23% and 19%, respectively). The bloc that most wants to kick out the parties: LGBTQ adults under 30, of whom 35% support discriminating against bridal parties.

The survey also finds President Donald Trump gets a 77% disapproval rating for his LGBTQ record, which apparently stems from his agenda to allow anti-LGBTQ discrimination in workplaces, bakeries, health care, homeless shelters, and the military.

The research, based on interviews with 801 LGBTQ people this month, is among the most comprehensive of its type in the United States. The margin of error at the 95% level of confidence for the total sample is ±3.46%. In many ways, LGBTQ Americans reflect the nation at large, such as in terms of race, region, and income. But their lives, and fears, diverge in others.

Respondents were asked whether they are afraid of violence or discrimination for holding hands in public. Sixteen percent of LGBTQ respondents are very afraid, 41% are somewhat afraid, and 28% aren’t too afraid. Just 15% say they aren’t afraid at all. Responses are similar among LGBTQ people of color, of whom 21% are very afraid, 42% are somewhat afraid, 24% aren’t too afraid, and 14% are not at all afraid.

Same-sex couples have long been targets of violence, as reflected in reports of hand-holding pairs taunted and beaten in Texas, punched and kicked in Miami, stabbed in Seattle, and stabbed in Denver.

Fear of holding hands is more pronounced among transgender people, with 81% saying they are very or somewhat afraid to hold hands publicly, and zero saying they have no fear.

Transgender women face high rates of violence across the US, including in Dallas, where the death of a fourth black trans woman has alarmed LGBTQ residents and police this month.

Fifty-nine percent of LGBTQ people report being called a slur, such as faggot, and 64% say someone had made negative assumptions or offensive comments about them because of their sexual orientation or gender identity. Among trans people, 81% report being referred to with a slur.

LGBTQ people, overall, report facing discrimination personally in workplaces (26%), when using restrooms that match their gender identity (14%), being refused service by a business (12%), and in housing (10%).

More than three-quarters believe trans people face more discrimination (83%) than other LGBTQ people. And transgender people, accordingly, reported having personally been discriminated against at higher rates: in workplaces (47%), restrooms that match their gender identity (43%), businesses that refuse service (36%), and housing (32%).

Most LGBTQ people think discrimination is banned in their state — but many are wrong.

Just over one-third of LGBTQ people in states where discrimination on the basis of gender or sexual orientation is legal — such as Texas, Florida, and Montana — incorrectly think they’re protected by the state.

There is near-universal support, 97%, for a bill in Congress that would explicitly ban anti-LGBTQ discrimination nationwide, known as the Equality Act.

When asked if that bill should include a carve-out for religious beliefs, like for an evangelical Christian baker who doesn’t want to bake a cake for a same-sex wedding, 27% of LGBTQ people somewhat or strongly supported a religious exemption in the bill. The remaining majority opposed it.

While LGBTQ people say current government policies are discriminatory, they stressed individual prejudice as a more severe issue, with 70% saying it is a very serious problem and 24% saying it’s only somewhat serious.

That prejudice isn’t limited to straight people. Among LGBTQ people, 6 in 10 would consider dating a transgender person — the only outlier being gay men, of whom 66% said they wouldn’t. ●