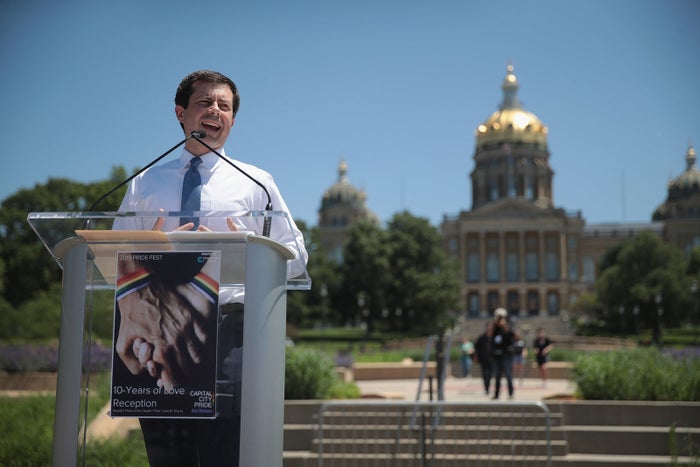 A new poll finds that while LGBTQ Americans are divided on certain political issues, like who should be the Democratic nominee for president, they overwhelmingly agree on others: President Donald Trump should be impeached, sex work should be legalized, and anti-gay sentiment among Democrats will be a challenge for Pete Buttigieg in the 2020 presidential race.

Buttigieg, the mayor of South Bend, Indiana, who is seeking the Democratic nomination, has made no bones about being a gay man — routinely trotting out his husband Chasten at campaign stops. But 87% of LGBTQ Americans think he’ll face a challenge next year due to anti-gay bias, even in the Democratic primary, according to a new survey conducted by Whitman Insight Strategies and BuzzFeed News. Only 13% disagreed. 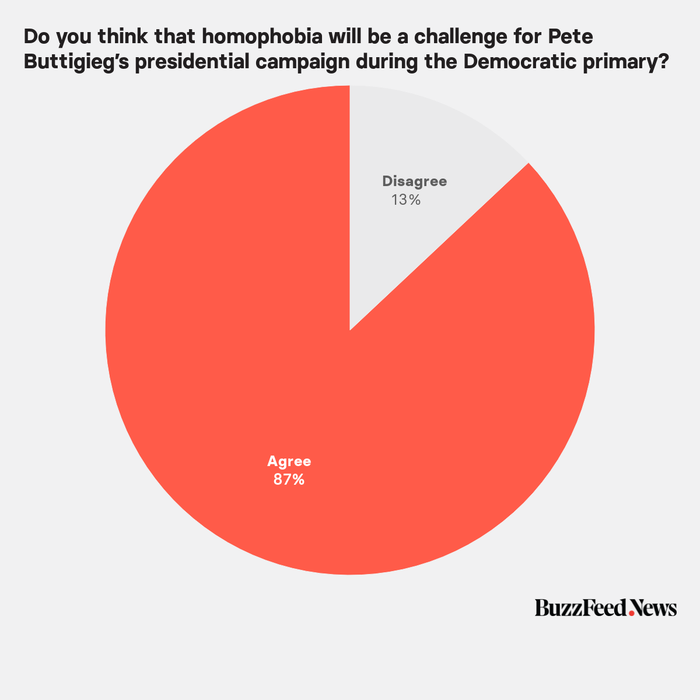 The favorite among gay men, Buttigieg is the only openly gay LGBTQ candidate seeking the party’s nomination. But he’s not necessarily the favorite with all LGBTQ adults — and 89% of LGBTQ respondents think it’s harder for LGBTQ candidates to run for office.

That reflects a fear among some Democrats that Buttigieg’s sexual orientation could turn off some of their own voters.

Former vice president Joe Biden fares better with 68% support in a match-up with Trump. The candidate who came out on top? Sen. Bernie Sanders, with 72% of LGBTQ adults saying they’d pick him over the current president. Sanders’ popularity is in part due to his support from young people — 78% of LGBTQ people under 30 would back him.

Based on interviews with 801 LGBTQ people this month, the survey is among the most comprehensive of its type in the United States. The margin of error at the 95% level of confidence for the total sample is ±3.46%.

LGBTQ people skew more female than Americans at large — 55% — and overall, LGBTQ people are younger than the general adult population (69% are between 18 and 39 years old), and nearly three-quarters live in cities or suburbs. Similar to the general population, 21% are people of color.

It follows, perhaps, that a majority of LGBTQ people think Congress should begin an impeachment inquiry into the president, with 60% supporting the move and 24% opposing. Sixteen percent weren’t sure. Trump’s LGBTQ approval rating is abysmal — 81% disapprove, 16% approve, and the rest aren’t sure.

Support for changing laws on sex work is especially strong. Eighty-three percent of LGBTQ Americans think sex work between consenting adults should be legal, with nearly all in this group agreeing with the statement that legalization will “minimize the risk” for sex workers. Those dissenting, 17%, want to maintain existing bans, largely agreeing with the statement that legalizing sex work “will worsen the problem and endanger sex workers.”

Asked about the identity of the next candidate, 55% of LGBTQ people agreed that the Democratic nominee must be a woman, person of color, or identify as LGBTQ. Forty-five percent disagreed.

Even if closeted politicians advocate for anti-LGBTQ policies, 60% of LGBTQ people think it’s unacceptable to out them publicly. The remaining 40% said outing those folks is okay.

The full topline results of the survey are here.