Laws to allow same-sex marriage are expected to pass federal parliament within three weeks, after a majority ‘yes’ vote in the national survey.
Debate on a bill introduced by West Australian Liberal senator Dean Smith began in the Senate today, but won’t resume until the final sitting fortnight of the year starts on November 27.
Attorney-General George Brandis, who has proposed two amendments, believes the bill will pass the lower house before December 7, the last scheduled sitting day for the year.
“So I think the beginning of next year is what we’re looking at,” Senator Brandis said of the timing of the first legal same-sex weddings. 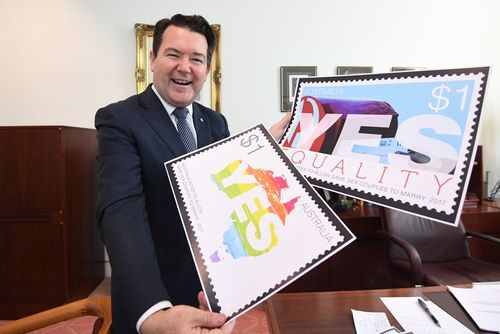 Dean Smith poses for photographs with designs for stamps after the introduction of the Marriage Amendment Bill into the Senate at Parliament House yesterday. (AAP) (AAP) 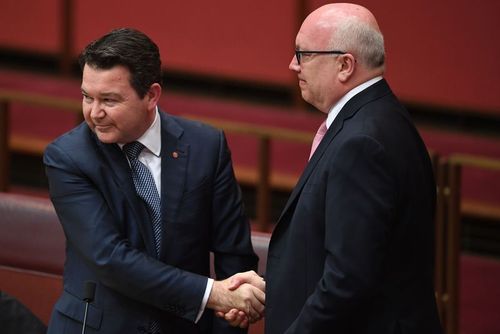 Senator Brandis is hopeful his two amendments will give those who are concerned about aspects of the Smith bill – including coalition colleagues – some “reassurance”.
One amendment is to ensure nothing in the bill limits or inhibits the freedom of people to practice and profess their religion.
The second would enable civil marriage celebrants to conscientiously object to presiding at same-sex weddings. 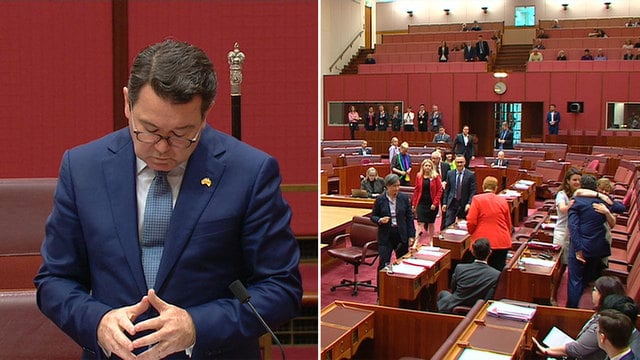 Shadow attorney-general Mark Dreyfus said the Smith bill was an “acceptable compromise” which was the product of months of cross-party work and it would take a lot of convincing any amendments were needed.
“But of course we will look at what Senator Brandis puts forward if and when he does so,” Mr Dreyfus said.
Labor senate leader Penny Wong said it was a “proud day for Australia”.
“It’s a day when this parliament has an opportunity to reaffirm those Australian values of fairness and equality, a day when this parliament can recommit to the ideal of Australia as the land of the fair go,” she said.
Senator Smith was embraced by politicians from all sides after his speech which kicked off today’s debate. 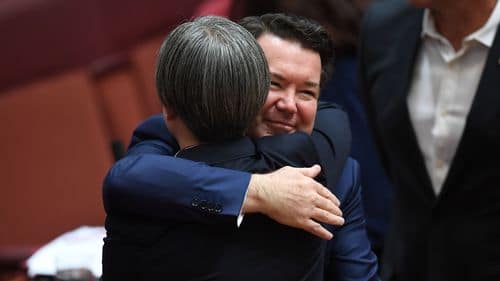 Supporters of same-sex marriage are seen celebrating the victory of the ‘Yes’ vote in the marriage equality survey at a street party. (AAP) (AAP)

“I never believed the day would come when my relationship would be judged by my country to be as meaningful and valued as any other. The Australian people have proven me wrong,” Senator Smith told parliament as he fought back tears.
Prime Minister Malcolm Turnbull launched a media blitz, taking a victory lap with other marriage equality advocates.
“It’s very satisfying because we put our faith – I put my faith – in the goodwill and common sense of Australians and they responded responsibly with love and with respect,” he said.
Labor leader Bill Shorten said his party was not up for “more discrimination or any delay”.
“I think people just want us to get on with it,” he said.
© AAP 2019