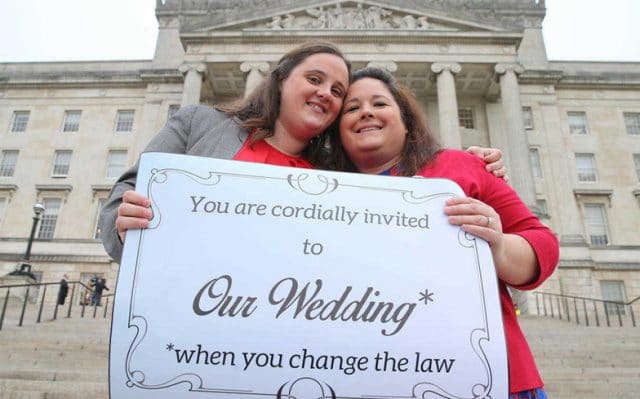 The Commons voted 383 to 73 on a clause that would extend equal marriage to Northern Ireland, which was tabled by Labour MP Conor McGinn.

Although the government has long said that same-sex marriage should not be imposed on Northern Ireland by Westminster, McGinn argued that the fact that the assembly and executive have been suspended since January 2017 means action must be taken.

“Tonight, we have the chance to do the right thing. People in Northern Ireland, and indeed across Britain and Ireland, are watching,” McGinn said before the vote. “I, for one, am not going to let them down. I hope colleagues do not let them down either.”

While the vote resulted in a huge majority for extending same-sex marriage to Northern Ireland, there is still some process to go before it will be passed into law.

If the government remains stalled in Northern Ireland, it would mean this amendment would theoretically result in an automatic change in the law.

However, if Northern Ireland’s executive is revived by October 21 then they would have the opportunity to either approve to repeal the change.

Ahead of the vote today, Northern Ireland minister John Penrose said that the government would honour the decision.

“Should this pass it will go into law,” he said. “It will become part of primary legislation. And so ministers will be bound by it and the government will proceed.”

Reacting to the result, Paul Twocock, Executive Director of Campaigns and Strategy, Stonewall said: “This is a huge step forward for LGBT equality in the UK and a tribute to those who have spent years building momentum and public support for equal marriage in Northern Ireland.

“We’re proud of the tireless work our partners at the Love Equality campaign have done to push forward the legalisation of equal marriage. Equality has long been overdue for LGBT people in Northern Ireland, and over three-quarters of the Northern Irish public (76 per cent) support the change in law.

“It’s right that Westminster has today moved to end this long-standing injustice while the Northern Ireland Assembly is not sitting. It’s great Conor McGinn’s amendment has passed today to extend equal marriage to Northern Ireland. We hope the Lords will do the same, so same-sex couples in Northern Ireland will finally be able to celebrate and enjoy the same rights to marry as everyone else in the UK”

MPs will also now vote an another amendment to the bill to extend abortion right to Northern Ireland.

That has been brought to the table by the Labour MP Stella Creasy.