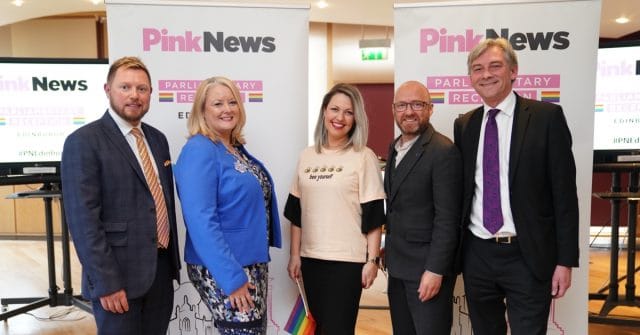 Politicians gathered in Scottish parliament today (June 14) for the PinkNews summer reception to celebrate the LGBT+ community in Scotland and to outline their plans to achieve LGBT+ equality.

Gail Ross MSP of the Scottish National Party (SNP) gave an introduction on behalf of the Scottish government and was forceful in her support of trans rights in what Christina McKelvie, Scottish Minister for Older People and Equalities, called one of the best countries in the world for LGBT+ rights.

MSP Jamie Green of the Scottish Conservatives spoke about the protests outside schools in Birmingham and said he hoped that conflict over the inclusive lessons would not reach Scotland, which was the first country in the world to implement LGBT+ inclusive education in all state schools.

The Scottish Labour Party’s representative Richard Leonard reminded those gathered of the importance of understanding real LGBT+ experiences. He said: “Come and speak to the worker that is trans and overcoming obstacles in the factory where they work… Until the transgender community gains equality, none of us is equal.”

“Until the transgender community gains equality, none of us is equal,” said Labour MSP Richard Leonard. (Ashley Coombes/ PinkNews)

Patrick Harvie, MSP for the Scottish Green Party, looked back on his work towards striking down Section 28, the controversial law which prohibited the “promotion of homosexuality,” and said that homophobia is still a “life and death issue.”

Harvie continued: “The community must come together to fight the anti-trans rhetoric and the rhetoric of the Birmingham protests.”

McKelvie also announced the shortlist of nominees for the Public Sector Award at the PinkNews Awards later this year.

The Edinburgh reception was supported by Barclays and CYBG. Judith Currie from Barclays spoke about how the organisation has an inclusive environment where everyone can be themselves.

Colleague awareness, building an ally network, being a model organisation and partnerships with other organisations to promote inclusion were all important to Barclays, she said.