WASHINGTON (Reuters) – Former U.S. Special Counsel Robert Mueller on Wednesday defended the integrity of his Russia investigation during a dramatic congressional hearing and reiterated that he had not cleared President Donald Trump of obstruction of justice or, as the president has said, totally exonerated Trump.

Mueller appeared for eagerly anticipated testimony at the first of two back-to-back congressional hearings that carry high stakes for Trump and Democrats who are split between impeaching him or moving on to the 2020 election.

The former FBI director, who spent 22 months investigating Russian interference in the 2016 U.S. election and Trump’s conduct, appeared first before the House of Representatives Judiciary Committee.

The committee’s Democratic chairman, Jerrold Nadler, praised Mueller and said no one, including Trump, is “above the law.” But Republicans tried to paint Mueller’s investigation as unfair to Trump, with conservative congressman Louie Gohmert heatedly telling him “you perpetuated injustice.”

Trump has claimed that the Mueller inquiry resulted in the president’s “complete and total exoneration.” Asked by Nadler if he had exonerated Trump, Mueller said, “No.”

Mueller, accused by Trump of heading a “witch hunt” and trying to orchestrate a “coup” against the Republican president, said his inquiry was conducted in “a fair and independent manner” and that members of the special counsel’s team “were of the highest integrity.” Trump has accused Mueller of having conflicts of interest. Mueller noted that Justice Department ethics officials confirmed he had no such conflicts.

In a comment sure to disappoint Republicans, Mueller said he would not answer questions about the origins of the Russia probe in the FBI before he was named to take over the inquiry in 2017 or about a controversial dossier compiled by a former British intelligence agent. Republicans have tried to portray the investigation as a politically motivated attack on Trump.

The hearing provided Democrats a chance to air publicly and in plain language the key findings of the sometimes dense Mueller report. Democrats entered the hearings hoping Mueller’s testimony would rally public support behind their own ongoing investigations of the president and his administration. Democrats are deeply divided over whether to launch the impeachment process set out in the U.S. Constitution for removing a president from office for “high crimes and misdemeanors.”

Mueller’s investigative report said the inquiry found insufficient evidence to establish that Trump and his campaign engaged in a criminal conspiracy with Russia. The report did not reach a conclusion on whether Trump committed the crime of obstruction of justice in a series of actions aimed at impeding the inquiry, but pointedly did not exonerate him.

Democrats repeatedly asked Mueller about actions by Trump, including at one point telling his White House counsel to remove the special counsel.

The Justice Department has a longstanding policy against bringing criminal charges against a sitting president.

But Republican congressman John Ratcliffe accused Mueller of exceeding his authority in the report’s extensive discussion of potential obstruction of justice by Trump after the special counsel made the decision not to draw a conclusion on whether Trump committed a crime. Ratcliffe agreed that Trump was not above the law, but said the president should not be “below the law” either.

Collins said the facts of the Mueller report are that “Russia meddled in the 2016 election. The president did not conspire with Russians. Nothing we hear today will change those facts.”

Before the hearing, Trump complained on Twitter that Mueller had not investigated various of the president’s foes including 2016 Democratic presidential candidate Hillary Clinton and, referring to the former special counsel, “HIMSELF.”

Trump has accused Mueller of having conflicts of interest and called the special counsel’s team of lawyers “thugs” with a Democratic political agenda. Trump is hoping to move beyond the Russia investigation as he runs for re-election in 2020, with a large field of Democratic candidates competing for their party’s nomination to challenge him.

The Justice Department on Monday sent a letter telling Mueller to limit his testimony to merely discussing what is written in the report, a directive that the two committee chairmen rejected as exceeding the department’s authority.

Mueller appeared for his testimony reluctantly and only after being subpoenaed.

Until Wednesday, Mueller had not faced questioning in public about his findings. He remained silent when the Justice Department on April 18 released a redacted version of his 448-page investigation report, which the special counsel had submitted to Attorney General Barr the prior month. Mueller made a nine-minute statement to reporters on May 29 at the Justice Department but took no questions. 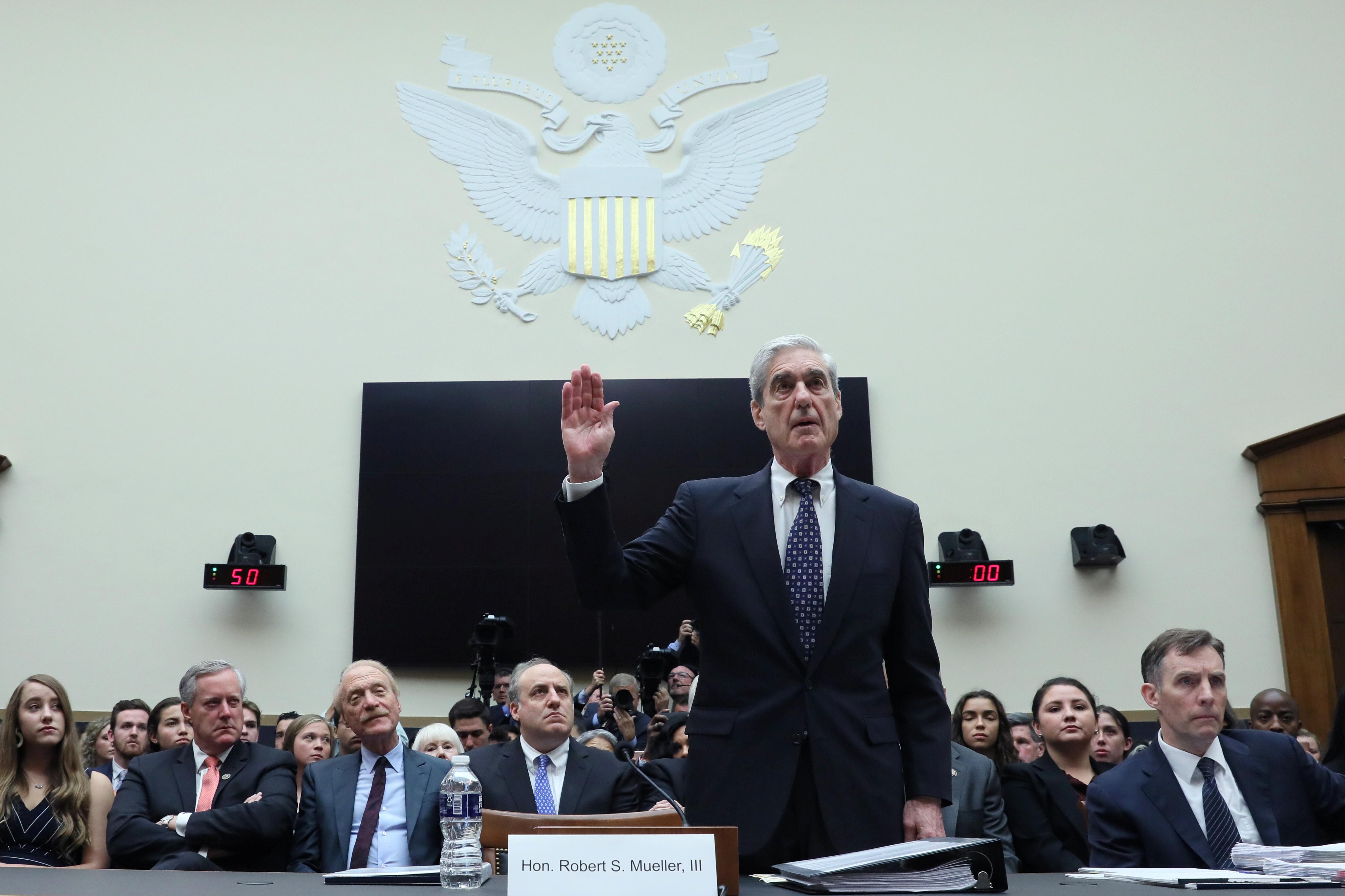 Mueller, who served as Federal Bureau of Investigation director from 2001 to 2013 under presidents in both parties, was named as special counsel by the Justice Department in May 2017 to take over the FBI’s Russia probe after Trump fired James Comey as the agency’s chief. Mueller’s inquiry lasted 22 months.

With a no-nonsense reputation, Mueller is a Marine Corps combat veteran from the Vietnam War who later served as a federal prosecutor and became the architect of the modern FBI after the Sept. 11, 2001, attacks on the United States.