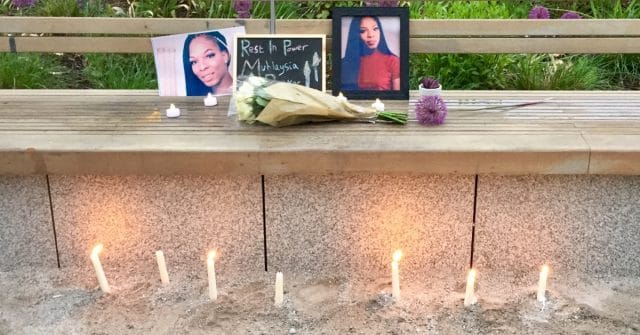 A small crowd gathered outside the US Embassy in London this evening (May 29) to remember Muhlaysia Booker, the black trans woman recently murdered in Dallas, Texas.

Standing in a semi circle around photos of Booker, people from London’s LGBTQ+ community held candles and took it in turns to speak about the importance of marking her loss and remembering her life.

“She is important even to those who didn’t know her, and she is remembered,” Ren, 24, said. “For as long as someone somewhere is demonstrating, is remembering, is holding a candle and thinking of her.”

Others spoke of the violence faced by the trans community worldwide.

“There’s a lot more work to be done before we can consider ourselves free. We all know we have a long way to go before we can exist without threat,” Ren said.

Julian, who was born in Texas, said, “Muhlaysia was the second black trans woman to be killed in Dallas in just six months. And what about all the other cities in America, all the people we don’t know about? In Texas, murdering a trans person is not recorded as a hate crime. And change is slow in America. We’ve got a long way to go.”

The vigil was organised by London-based trans activist network Transmissions.

Police responded to a 7am call on May 18 about a shooting and found Booker face down in the street, dead from a gunshot wound.

She was the fourth of five black trans woman known to have been killed in the US in 2019 so far, according to the Human Rights Campaign, which records violence against the trans community.

“Fatal violence disproportionately affects transgender women of colour … the intersections of racism, sexism, homophobia, biphobia and transphobia conspire to deprive them of employment, housing, healthcare and other necessities, barriers that make them vulnerable,” HRC said.

Booker’s funeral was held yesterday (May 28) in Dallas. More than 400 people gathered to pay their respects.

Police have yet to make any arrests in the ongoing investigation into her murder and said there is no evidence linking Booker’s death to the brutal assault she suffered in April 2019.

On April 12, Booker was the victim of a violent public beating that authorities called an “apparent act of mob violence” and a possible hate crime.

The Friday night assault happened in a car park after an alleged minor traffic accident, in which Booker accidentally backed into a man’s car.

According to police reports, he then pointed a gun at her and refused to let her leave the car park until she paid for the damage.

A crowd gathered around them and someone shouted offering the man $200 to beat her up.

Booker suffered concussion, a fractured wrist and multiple other injuries before a group of woman managed to surround her, get her safely into a car and take her to hospital.

Video footage showing Booker being beaten while the crowd watched went viral after being shared on social media.

Dallas mayor Mike Rawlings said he had seen the video and was “extremely angry about what appears to be mob violence against this woman.”

A week after the assault, on April 20, Booker made a public statement, drawing attention to the disproportionate violence against trans women of colour. She said, “This time I can stand before you; whereas in other scenarios, we are at a memorial.”

Protesters gathered in New York on Friday 24 May to demand an end to the killings of black trans women and urge the Trump administration to abandon its proposals to reverse trans rights.

Vigil organisers Transmissions are also one of the organisers of London Trans Pride, which will be held for the first time in September 2019.