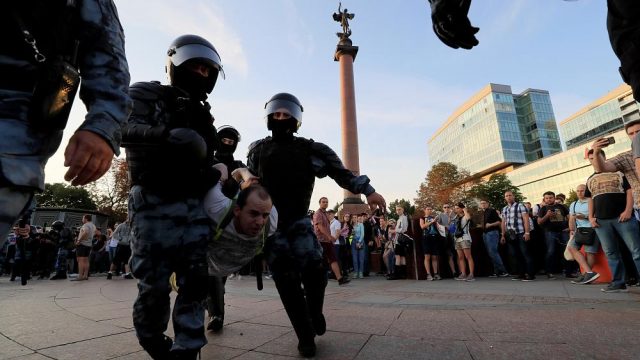 Protesters calling for free elections are set to hit the streets of Moscow for a second weekend running.

A week ago demonstrations were met with a heavy police presence and 1,300 protesters were detained.

Watch Euronews’ Galina Polonskaya report on last week’s detentions in the player below:

Police have again warned protesters against turning out on Saturday calling the unauthorised rally illegal.

“We are officially warning the event is illegal,” said a press statement from Moscow police.

“We suggest that Muscovites and guests of the capital refrain from participating in it. We remind you of the responsibility provided by law for organising uncoordinated public events, as well as for participating in them.”

Nevertheless, as of Friday evening, 6,000 Facebook accounts indicated they will attend the protest, while a further 13,000 are “interested” in attending.

The demonstration is against the alleged prevention of opposition candidates running in the Moscow city council elections.

Russian authorities on Friday moved to press criminal charges against 10 people for their involvement in what they called mass unrest at an opposition protest last weekend.

Some on social media have drawn parallels between the current protests and those seven years ago in Moscow’s Bolotnaya Square.

That rally, on May 6, the day before Vladimir Putin was inaugurated as Russia’s president, saw clashes between police and protesters.

Police said protesters turned on them with flagpoles and metal crowd barriers, and that some tore up asphalt and threw it at them.

Protesters said officers wearing flak jackets and helmets struck them with batons and pushed many of them into a confined area, an action the protesters saw as a provocation.

Andrei Kolesnikov, from the Carnegie Moscow Center, said there were significant differences between the two events.

“In 2011-2012 the street had the impression that the authorities were about to enter into constructive negotiations, at least they would start talking, and this will open the gates to a bright democratic future.

“Now there are no such illusions at all.”

In both instances, demonstrators protesting local issues were detained by police.

“All this can be called conditionally a revolution of dignity because the main motive here is not socio-economic and not political, but ethical: people demand respect for themselves,” he added.

Kolesnikov called the police crackdown unconstitutional, claiming according to Russian law citizens have the right to “assemble peacefully without weapons, hold meetings, rallies and demonstrations, marches and pickets”

Last week, the head of the Central Election Commission (CEC), Ella Pamfilova, said the opposition candidates that wanted to stand for election in Moscow were not dangerous for the Kremlin or the mayor’s office.

But, according to Kolesnikov, if these candidates take part in the elections and go to the Moscow City Duma, this will create a dangerous precedent for the authorities.

“Everything that is authentic, everything that is non-imitative, is terrible for the authorities precisely by the fact that it can spread as an infection to other regions in other elections at all levels,” he said.

_Read more about the protests in Moscow here.
_