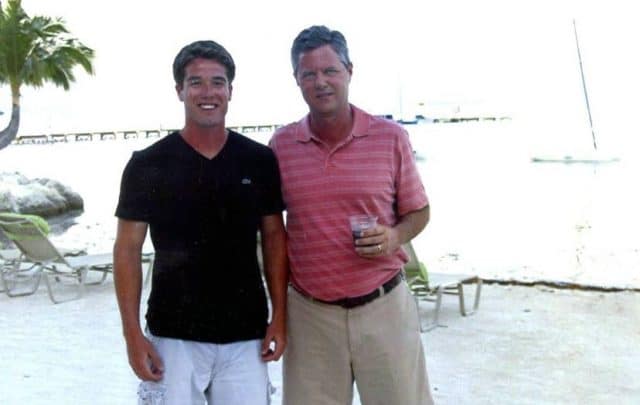 The Miami Herald and The New York Times both published reports this week outlining the details of a bizarre scandal involving a lawsuit between a Miami Beach “pool boy” and Liberty University President Jerry Falwell Jr. and his wife. The scandal also involves President Trump’s ex-lawyer Michael Cohen, who claims to have helped Falwell Jr. stop racy and “personal” photos from leaking in 2016 just months ahead of Falwell’s endorsement of Trump in 2016.

According to the Miami Herald, the national evangelical leader struck up an “unusual partnership” with “Giancarlo Granda, a handsome, 20-something pool attendant whom Jerry and his wife, Rebecca, 52, befriended at the Fontainebleau hotel in 2012, and within months, would set up as part-owner and manager of a $4.7 million South Beach hostel.”

Lovely shot of the very religious, @JerryFalwellJr and the pool boy. pic.twitter.com/bwx5rTYUwr

As the newspaper notes:

It was an unusual partnership: The president of the largest Christian university in the world, a school that prohibits gay sex, agreeing to operate a Miami Beach hostel, regarded as gay friendly, in conjunction with a “pool boy” with virtually no hotel management experience after they met at the storied Fontainebleau, a favored South Florida vacation ground for the Falwells. Yet there they were, not only business partners but mingling socially at Cheeca, an idyllic, exclusive resort in the Keys.

The relationship between the Falwells and Granda forms the backdrop of an improbable Miami story that is causing political ripples beyond South Florida. It involves a multimillion-dollar lawsuit, the “pool boy” as he is described in the lawsuit, the comedian Tom Arnold, Michael Cohen, President Donald Trump’s now imprisoned political fixer, naked photographs — and a Miami father and son who say they were defrauded in a real estate deal then forced to change their names due to “threats.”

At the heart of the scandal is a set of naked photographs that, according to the Herald, are of Falwell’s wife in “various stages of undress.”

“Three photographs have been seen by the Herald,” the newspaper reported on Wednesday.

The Herald adds: “They are images not of Falwell, but of his wife in various stages of undress. It is not known who took the photographs or when they were taken, and the Herald was not given the photographs and therefore, has not been able to authenticate them independently.”

Falwell, who is the president of Liberty University and has become one of Trump’s most outspoken evangelical supporters, asked Cohen for a personal favor in 2015 after someone obtained “personal” photos that would normally be kept “between husband and wife,” Cohen said in a taped conversation reviewed by Reuters.

Cohen discussed the Falwell photo incident in a conversation with comedian Tom Arnold, who secretly taped the conversation, according to Reuters.

“I actually have one of the photos,” Cohen told Arnold without offering any further detail. “It’s terrible.”

“There’s a bunch of photographs, personal photographs, that somehow the guy ended up getting — whether it was off of Jerry’s phone or somehow maybe it got AirDropped or whatever the hell the whole thing was,” Cohen told Arnold, according to the New York Times.

Cohen never revealed the name of “the guy” he was referring to, but he does make reference to a “pool boy” in the recorded call.

“I was going to pay him, and I was going to get the negatives and do an agreement where they turn over all the technology that has the photographs or anything like that, any copies,” he reportedly said, adding that the payment never actually happened and “the guy” just ended up deleting the pictures himself.

Earlier this year, Arnold bean tweeting his suspicions about the Falwells and Granda, suggesting that the couple had a sexual relationship with the young entrepreneur. There’s no evidence of that being true.