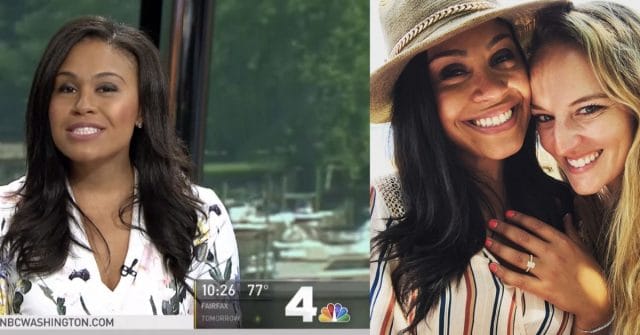 A NBC news anchor celebrated Pride Month by announcing her engagement to her girlfriend.

Meagan Fitzgerald, an anchor on NBC‘s Washington DC affiliate News4, spoke about her journey in an emotional on-air segment on Sunday (June 2).

Fitzgerald said: “I want to take a moment to acknowledge Pride Month and the fact it’s not always easy being gay, lesbian, bisexual or transgender. There’s the coming out process, finding out who you are, being comfortable in your own skin and your own truth.

“It takes courage to be your true, authentic self, no matter who you are. But to the boys and girls watching, to the men and women who may still be struggling, it’s worth it.

“Being just who you are is enough.”

The host explained: “I know this because I’ve been through that journey, and I’m excited to share with you some news… I’m engaged!

“My beautiful fiancee Kelly popped the question yesterday. It was such a beautiful day.

“I want people to hear that, because it’s not always easy. It’s such a process for people, and sometimes a struggle.”

Fitzgerald has been with girlfriend Kelly Heath, an ex-professional basketball player, for two years, according to NBC.

Messages of congratulations for the anchor flooded in from news team colleagues and viewers after she shared the news on-air.

Taking to Twitter, NBC Meteorologist Chuck Bell added: “Congratulations to my coworker and friend on her engagement! I hope you 2 share a long, happy life together. And, way to go! Everyone needs a positive role model but it’s especially true of minority communities like the one you and I share a membership in. #LoveWins”

Anchor Adam Tuss added: “Congrats to my co-anchor and friend and proud of her for this message! You rock.”

Meteorologist Lauryn Ricketts wrote: “Congrats to my girl @MeaganNBCDC on her incredibly inspiring message about love, pride and “just being yourself is enough”….SOOOOOOOOOO excited for the adventure her and her beautiful fiancee Kelly are about to embark on.”

Fitzgerald responded: “Overwhelmed by the love and support and so very grateful to work for @nbcwashington @NBCNews – a company that embraces and celebrates diversity and inclusion. Thank you so much again ♥️