Last week, we shared with you the news that 20-year-old Ethan Stables was arrested under the suspicion that he was going to attack an LGBTQ pub.

This suspicion came directly from Stables who shared on a Hitler appreciate Facebook group that he was going to “walk in with a fucking machete and slaughter every single one of the gay bastards.”

Then when Cumbia police apprehended him, Stables was doing reconnaissance right outside the pub. They also found a machete, some sort of explosive, and Nazi regalia like a swastika armband at his home.

Now, Stables is currently undergoing trial to see if he’ll be convicted and sentenced.

So far, the prosecution has called Stables a “white supremacist” shown the messages shared on Facebook (which you can see below) and shared a video of Stables saying “gay look nicer on fire” as he burned a rainbow flag. 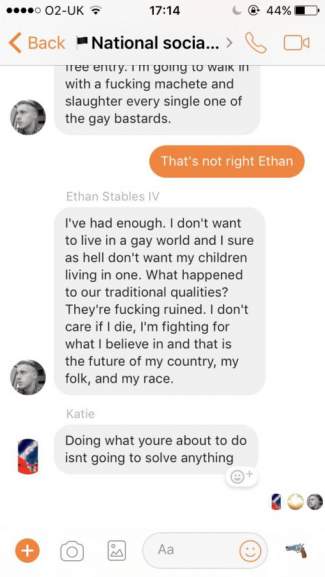 In addition, Stable’s defense team is sharing stories to make him look sympathetic. They’ve shared stories of Stables having a gay uncle/godfather, having a black best friend, and now Stables says he’s bisexual.

While in court, Stables says that he’s had sexual experiences with men, but that he’s run away from that fact because his parents would be “disgusted” and “ashamed.”

“I am disgusted and ashamed at myself for what I said. I just wish I could turn the clock back. I’m sorry.”

As for that gay godfather, he showed up to testify and said that he does’t think Stables is homophobic.

“I felt he did go off on paranoid fantasies. He would get very fixated on certain ideas,” he said.

“On one level it seemed totally bizarre (when he was arrested) but on another level we had all been waiting for something to happen.”