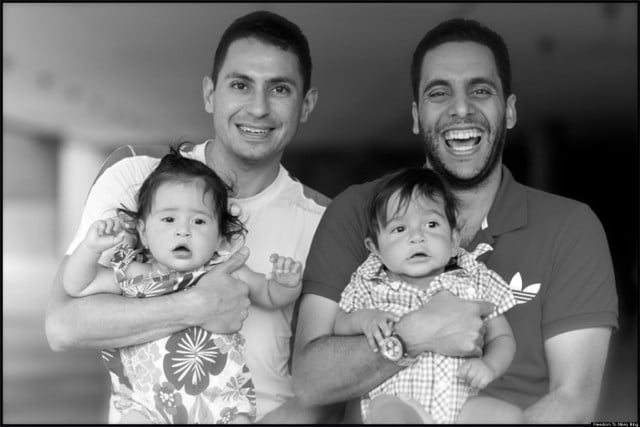 New study proves: the kids feel safe and are alright with gay fathers!

New study proves that children raised by gay fathers turn out the same as those kids who are raised by heterosexual parents. Is it really surprising? Mmm, nope!

"They're getting bigger, heavier and having ALL the opinions. Love my tribe." – @joeaaronreid. And we LOVE this photo! Thanks for sharing Joe! ❤️?‍?‍?‍?

Newsweek reported the result of a new study conducted by pediatrician Ellen C. Perrin of Tufts Medical Center and her team of researchers who got survey responses from 732 gay dads from 47 states all around the U.S. about their children.

According to this survey 88% of dads said it was untrue that their kid is unhappy or depressed, whereas in a federal survey conducted by the Centers for Disease Control and Prevention of heterosexual parents in the U.S., 87% claimed the same of their kids.

According to the federal survey 75% of hetero parents said that their child “does not worry a lot,” and 72% of same-sex parents followed the same idea.

“Consensus is overwhelming in terms of there being no difference in children who are raised by same-sex or different-sex parents,” claimed University of Oregon sociology professor Ryan Light, who is also an author of this study.

It's hard to get much cuter than this! Thanks @the_real_dads_of_melbourne's Jarrad, Michael and Reid for sharing this gorgeous pic! ❤️?‍?‍?

This survey also showed the figures of 20 and 30% of gay dads who were stigmatized for being gays, “mostly from other family members, friends and some people in religious contexts.”

“One-third of parents reported their children had been subjected to teasing, bullying or other stigmatizing experiences by friends.”

Happy Easter from the Burtka-Harris bunnies and one lil' chick!

“Our data add to those of other investigators showing that children of same-sex parents do as well in every way as children whose parents are heterosexual,” concluded Dr Perrin.

Now there are around 690,000 same-sex couples in the United States, 19% of them are bringing up children under the age of 18.

How does your family keep fit and healthy? Gay dads Norm and Mike take their four sons hiking! Check out this family’s awesome fitness photo diary by clicking the link in our bio, and tag a friend below and be eligible to win a month’s supply of SmartyPants (@smartyhealth) Vitamins! #sponsoredpost #ad

Perrin’s team study supports recent study that was done by the Williams Institute. According to this study “households with same-sex parents show no differences from those with opposite-sex parents in regards to partner relationships, parent-child relationships, children’s physical and emotional health, the children’s coping skills and learning behavior, and more.”

Throwback to last weekend! Thanks Clint for sharing your family's Easter snap with us! @clinthudler

Good luck, gay dads! Follow your dreams, adopt and give birth to your children, love and take care of them and stop paying much attention to the people who can bully or stigmatize you for being who you are!