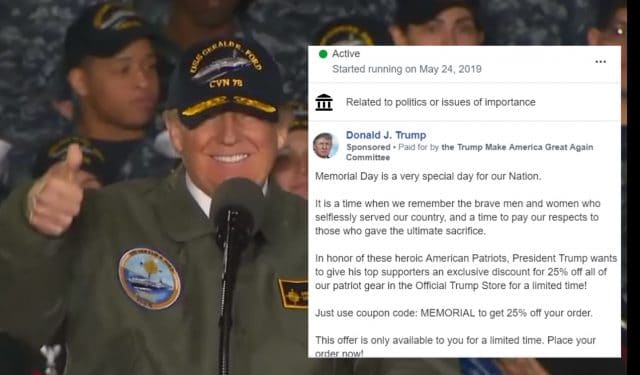 A new Facebook ad paid for by the Trump Make America Great Again Committee is encouraging Americans to honor “American Patriots” who “made the ultimate sacrifice” this Memorial Day by purchasing “patriot gear” from the Official Trump Store.

“Memorial Day is a very special day for our Nation,” the ad begins. “It is a time when we remember the brave men and women who selflessly served our country, and a time to pay our respects to those who gave the ultimate sacrifice. In honor of these heroic American Patriots, President Trump wants to give his top supporters an exclusive discount for 25% off all of our patriot gear in the Official Trump Store for a limited time!” The add then prompts supporters to use the coupon code “MEMORIAL” and notes that the “offer is only available for a limited time.”

Reporter Judd Legum shared a screenshot of the ad campaign which began running on Facebook Friday.

Twitter users blasted the ad as a “new low” for Trump:

Nothing more American than profiting from foreign made goods funded by the lives of soldiers in wars we started (for profit). pic.twitter.com/h0G6n3QGla

Just use coupon code BONESPURS to complete avoid your legal obligation to submit to the draft.

“Only available to you for a limited time” is also an insanely tone deaf sentence about the gear being sold on the weekend we remember our war dead.

this swamp is sooooo deep now!