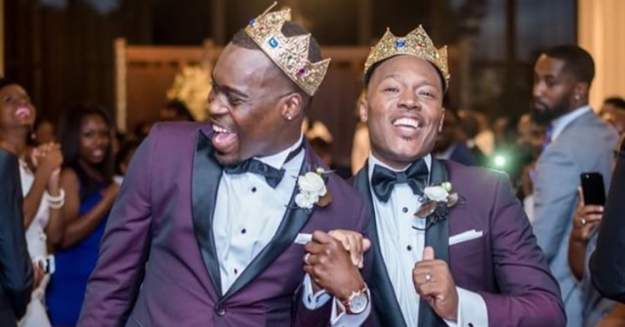 The study, which was published by the National Bureau of Economic Research, was a combination of data from the Centers for Disease Control and Prevention’s Behavioral Risk Factor Surveillance System between the years of 2000 and 2016.

But how did they know which households in the data belonged to same-sex couples? Well as Vanderbilt’s Research News reports, the CDC data didn’t ask respondents about their sexual orientation. As such, the Vanderbilt researchers deduced from earlier data that a percentage of adults in households of two were same-sex couples.

4 years being married to the love of my life, each day gets better and I can’t wait to have more adventures! #wedding #anniversary #london #gaymarriage #uk #happy #adventure #family

As for women in same-sex households, there seemed to be no significant difference. That said, researchers say this is probably the fault of the data and its limitations.

Another surprise in the data was the fact that despite the increase in access to health insurance and health care, there were no effects to the actual health in the populations.

“For example, mental health was not improved, and there were no changes in negative health behaviors such as cigarette smoking or heavy drinking,” said co-author Gilbert Gonzales said. “That might mean that it’s too soon to see some of these changes, since legalized, same-sex marriage is a fairly recent phenomenon in the United States.”

While some of the data was limited, Carpenter says it was still incredibly important to collect and report on.

“This is an important question to study, since recent research has shown that LGBT individuals often face barriers to accessing health services including lack of insurance, stigma, and discrimination, and, as a result, can experience poor health outcomes,” said Christopher Carpenter, “A very large body of research in economics and sociology demonstrates that marriage is protective for health for heterosexual individuals, but ours is the first to show that marriage policy has meaningful effects on health care access for sexual-minority men.”

The next step for these researchers is to analyze more comprehensive data to find out if there was any effect to health that couldn’t be found in this batch of data.