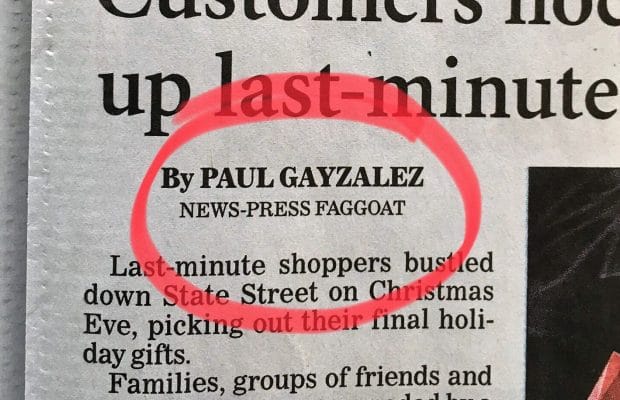 A reporter for the Santa Barbara News-Press, Paul Gonzalez, who wrote an article about last-minute Christmas Shopping was the victim of a bad homophobic joke by another staffer. The writer’s last name “Gonzalez” was changed to “Gayzalez” and after the words News-Press, the word “Faggoat” appeared. The story ran in the paper on Christmas Day, but the online version of the byline was not changed.

According to the San Luis Obispo Tribune, the Donald Katich, Director of Operations at SBNP issued a statement in response to the tasteless action:

In Monday’s News-Press, one of our employees changed another employee’s byline to reflect an offensive slur. The News-Press has taken immediate and swift action with this employee; we do not tolerate any form of harassment in the workplace. We apologize to our readers.

Gonzalez has been approached by various media outlets and has refused to go deeper than mentioning that he is not the one who made that edit to his byline. He has also not made any public comments on social media and has deactivated his Twitter account.

Unrelated: The News-Press is known for being the only California newspaper to endorse Donald Trump during his presidential campaign.