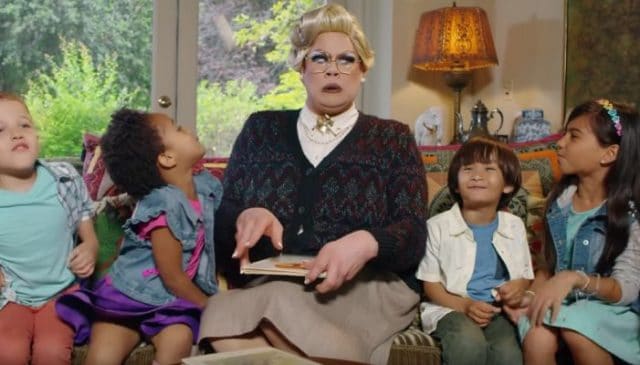 In the video, Nina is taking care of some kids when they ask her to put on a video. The video is Nina again, singing “Drag is Magic.”

“What is drag?” Nina sings. “Drag is a vacation from a boring day. Use your own imagination, all you gotta do is close your eyes and see who you wanna be.”

The song shares a title with her new children’s album.

“Drag is an opportunity for anyone – including and especially children – to reconsider the masks we are all forced to wear daily,” Nina told the Huffington Post.

“Children are inundated with implicit imagery from media about what is ‘boy’ and what is ‘girl.’ And I believe that almost all kids are really less concerned about playing with a toy that’s supposedly aligned to their gender, and more concerned with playing with toys that speak to them.”

“To all the little boys and little girls who don’t always see their unique selves reflected in other forms of media, or who are being told they are too feminine, or who are told they shouldn’t want to play with that toy – I want this album to be where they feel silly, goofy, loved and seen.”