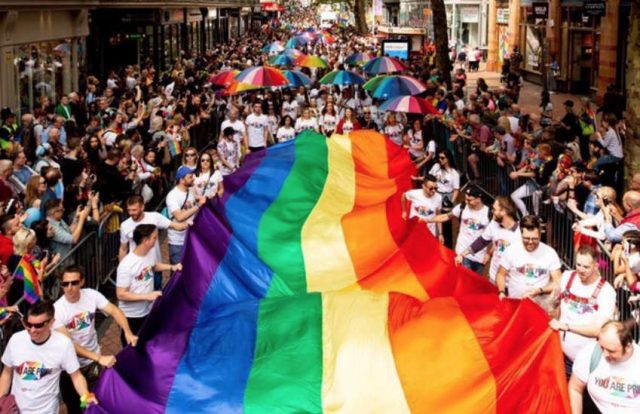 The teacher at the center of a row over LGBTI-inclusivity school lessons has led this Birmingham Pride parade.

Andrew Moffat, an assistant headteacher at Parkfield Community School, led the Pride march on Saturday (25 May).

In a show of solidarity, Moffat was joined by in leading this year’s Pride march through Birmingham.

Moffat experienced backlash for introducing lessons on LGBTI-inclusivity at his school.

The teacher’s No Outsiders program has been met with demonstrations from Muslim groups in Birmingham.

Moffat said that the opportunity to lead the parade was ‘absolutely wonderful’, .

The teacher was joined by Khakan Qureshi, the founder of Birmingham South Asians LGBT, and Saima Razzaq, from Supporting Education of Equality and Diversity in Schools (Seeds).

This is the first time Muslim groups had been at the front of the parade in the event’s 22-year history.

Razzaq set up Seeds in response to the protests outside Parkfield school.

Organizers estimated that over 100,000 people lined the streets to wave on the 5,000 participants of Saturday’s street parade.

The Pride event will run from until Sunday (26 May), with more events taking place in and around Birmingham’s Gay Village.

Celebrations will include live performances from bands such as The Human League and Faithless.

There will also be a number of drag acts taking place over the weekend. A full list of the events can be found on .

The row over LGBTI-inclusivity education in UK schools has been making headlines following a series of protests against the Parkfield Community School’s No Outsiders program earlier in the year.

Protestors in the Muslim-majority areas claim that primary school children are too young for such material, or that pro-LGBTI education stands in contrast to Islamic teachings. A number of schools in the area  as a result.

Despite the backlash, Moffat has been widely praised for his commitment to LGBTI-inclusivity education.

The teacher was awarded an MBE in 2017 and was shortlisted for a global teaching award earlier this year.

Numerous people have come out to support LGBTI-inclusivity lessons in UK schools.

This includes the education minister and the head of the UK’s school watchdog, Ofsted.

Ofsted ranked the Parkfield Community School as ‘exceptional’ in the past.