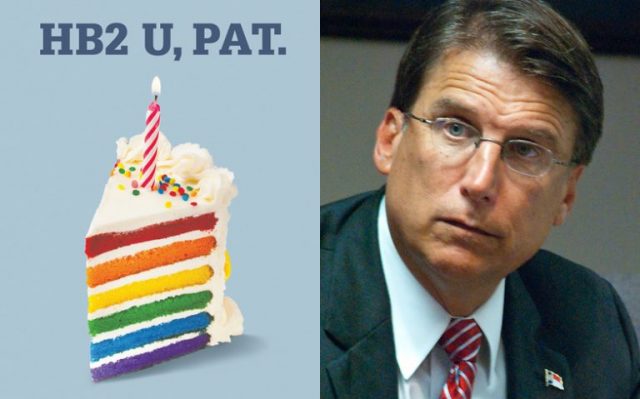 To celebrate the occasion, a progressive group of writers took out a full-page advert in the Raleigh News & Observer which features a rainbow layer cake and the headline “HB2 U, PAT”. The ad reads: “Governor McCrory, we send you our best wishes today as you celebrate your 60th birthday.

“But the real celebration will begin November 8th when North Carolina votes to move in a more progressive direction.”

The group, named Writers For A Progressive North Carolina, go on to urge readers to vote for a candidate who will “repeal HB2” – presumably meaning McCrory’s opponent, Democrat Roy Cooper.

Since passing HB2, North Carolina has seen a drop in tourism and a loss of business due to the law, with money giant PayPal scrapping plans to expand its business in the state costing hundreds of potential jobs.

Governor McCrory has received a huge amount of backlash, having recently claimed that he and his wife have ben “shunned” by friends and business owners after signing the discriminatory bill into law.

Last month, presidential hopeful Hillary Clinton visited the state’s capital city Raleigh for a political rally, where she slammed the law as a “mean-spirited, wrong-headed decision” by their governor.

Other big names to call out the law include Elton John, Beyoncé, Nick Jonas, Duran Duran and even the stars of RuPaul’s Drag Race.

See the full advert below: