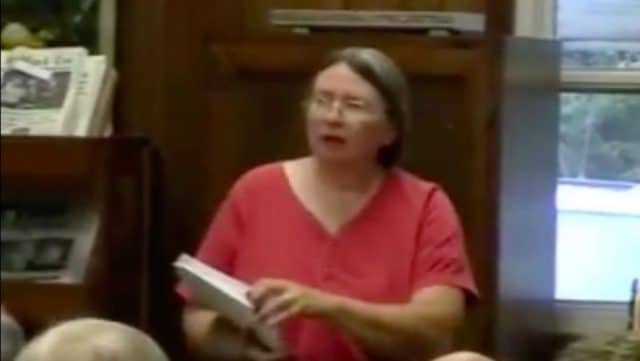 According to Diane Gramley, head of the American Family Association’s (AFA) Pennsylvania chapter, the 1969 Stonewall uprising wasn’t caused by queer people fighting against police harassment, it was caused by police trying to rescue a young transgender boy who was being sexually abused by the bar’s queer patrons.

Gramley made the baseless claim on a recent broadcast of Stand in the Gap, a radio show produced by the American Pastors Network, a largely evangelical, anti-immigrant, anti-Muslim, anti-LGBTQ group who believes that political progressives can’t be “genuine Christians.” Gramley’s organization, the AFA is also rabidly anti-LGBTQ.

After making her baseless claim on the podcast — to which the host Gary Dull offered no pushback or further questioning — Gramley said that being gay has since turned into “gay Pride month” and added that she has attended several Pride celebrations to find out what’s really going on. Here’s her unsurprisingly antagonistic take on the celebrations:

“Pride is definitely a menace to children as well as to the adults who are all part of this, who are pushing this agenda. It’s very much a menace to Americans because they use these Pride events to desensitize us to the dangers of their lifestyle, to the physical, psychological dangers of their lifestyle and the whole purpose is to desensitize us. So it’s a menace that doesn’t portray itself as a menace. So we have be very wary of situations like that.”

By claiming that police were trying to rescue a sexually abused transgender youth, Gramely continues to repeat the old canard that LGBTQ people are pedophiles who groom and sexually prey on young children, “turning” some of them gay, bi or trans. At the time of the Stonewall Riots, the word “transgender” wasn’t used; trans pioneer Virginia Prince popularized the term in her writing in the 1970s.

Her story is also completely unfounded as even New York police commissioner James P. O’Neill recently apologized on behalf of the New York City police force for the 1969 raid, stating, “I think it would be irresponsible to go through World Pride month and not to speak of the events at the Stonewall Inn in June of 1969 I do know what happened should not have happened. The actions taken by the NYPD were wrong, plain and simple.”

O’Neill surely wouldn’t have apologized had the police merely been trying to rescue a youth from sexual abuse.