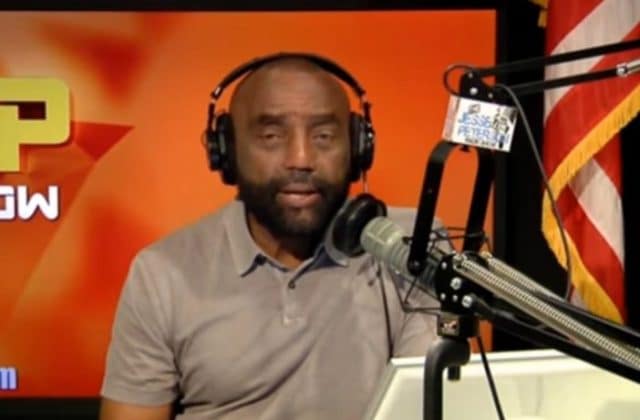 A conservative radio host and Christian pastor complained that gay people have stolen the terms “husband” and “wife” from straight people, and straight people are now calling each other “partners” because they’re “weak.”

Jesse Lee Peterson discussed South Bend Mayor Pete Buttigieg and Chicago Mayor Lori Lightfoot on his show this past Tuesday, and he got into a rant about how gay people who are married refer to their spouses with words that people have been using for centuries.

“Now they’re outwardly calling two men ‘husbands’ and two women ‘wives’ and the straight people are calling their relationships ‘partners,’” he said, as if there hasn’t been a straight couple in the last four years who used the words “husband” or “wife.”

Of course, this is LGBTQ people’s fault.

“The radical homosexuals started out calling their phony relationships ‘partners,’ and they convinced the straight people, ‘Don’t say girlfriend or boyfriend or fiance or husband or wife, say partner,’” he said, not citing a single gay person who ever told a straight person that they couldn’t call their spouses whatever they wanted.

But the LGBTQ plan to delegitimize straight relationships wouldn’t have worked if straight people weren’t weak, according to Peterson.

“And so the straight people — as weak as they can be — said, ‘OK.’ Now they’re called partners while the homosexuals have taken over terms ‘husbands’ and ‘wives.’”

While his rant is strange, the right has, for years, framed their hatred as an argument about language, like how they used the definition of marriage as a way to ban same-sex couples from marrying or how they argue about the definitions of “man” or “woman” to advocate discrimination against transgender people.

But if anyone is wondering if Peterson’s objection is purely linguistic, he prefaced his rant by saying that gay people just gross him out.

“You have a homosexual — a radical homosexual — running for president, and no one seems to care, no one is rebuking him,” Peterson said about Buttigieg. “And he even flaunts his so-called husband with no shame, kissing him in public, and people applaud like its real. They call a man ‘husband’ like it’s real. It’s shocking.”

“I’ve been told that they voted in a Black, radical lesbian for mayor of Chicago,” he continued, not one to leave lesbians out.

“Supposing she kissed her so-called wife….” He trailed off, not finishing that clearly horrifying thought.

Peterson, a black man who worries about men becoming “beta males” and believes that allowing women to vote was a “mistake,” is known for his racist views, in addition to his sexist and homophobic views.

“One of the things that I would do is take all black people back to the South and put them on the plantation so they would understand the ethic of working,” Peterson told The Huffington Post’s Black Voices in 2012. “I’m going to put them all on the plantation. They need a good hard education on what it is to work.”