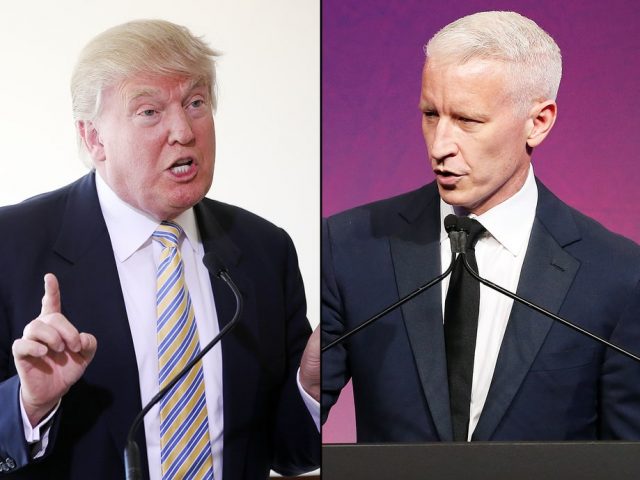 Anderson Cooper is one of the journalists moderating the presidential candidate Town Hall on Sunday. In anticipation of yet another cruddy performance by Donald Trump (he’s making a mockery of debate prep again), his supporters have decided to go after Cooper with a combination of gay-baiting and loony conspiracy theories.

Of course, Prince Tiny Hands himself started the attacks. Last month, Trump complained that Cooper would be “very, very biased,” adding “I don’t think he can be fair.”

The crazies that swirl around Trump like moths to a flame (or flies to a dung heap) obviously took this as a green light to pre-emptively criticize Cooper’s performance. Bill O’Reilly and Rush Limbaugh have already proclaimed that debate is rigged because Cooper and fellow moderator Martha Raddatz are in the tank for Hillary.

Needless to say, the gay-baiting thing had to be part of the attack. Right-wing sites grouse that Cooper supports same-sex marriage, which is against the Republican platform.  They fume that Cooper’s partner, Ben Maisani, contributed to Hillary Clinton‘s campaign, although no one has suggested that Rudy Giuliani is a Hillary mole because his daughter says she will vote for Clinton.

What particularly rankles is Cooper raking Florida Attorney General Pam Biondi (a grateful recipient of Trump Foundation largesse) over the coals for being a complete hypocrite about the Pulse nightclub shooting in Orlando. In normal circles, what Cooper did is called solid journalism, but Trump supporters don’t travel in those circles.

Of course, no attack would be complete without someone deciding that veiled hints aren’t enough. Radio host Alex Jones, who has reserved a place for himself in the highest reaches of Nutburger Heaven, not only goes after Cooper with undisguised homophobia but throws in a conspiracy theory for good measure.

“So what happens this Sunday?” Jones asked on his radio show. “What happens with this big royal rumble with the known CIA operative Anderson twinkle-toes, bite your pillow hosting it?”

Jones is best known for insisting that Barack Obama is gay, that the government is putting chemicals in potato chip bags that are making people and frogs gay, and that Marco Rubio (also gay) isobsessed with Trump’s “package.”

Clearly Jones barely has a nodding acquaintance with reality.

As for the CIA agent bit: there is a grain of truth in it. Cooper did intern for two summers at the CIA twenty years ago. He says that the experience was “pretty bureaucratic and mundane, at least the little bit that I saw of it.”

Of course, you know he’ll really be employing all those secret interrogation techniques that the CIA trained him in against Trump come Sunday night.