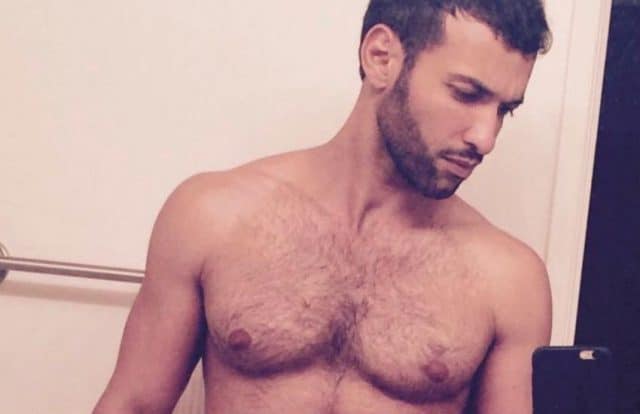 ‘I am a gay, Muslim, Arab-American man’

In a sassy Facebook post, he publicly came out for the first time since denying he was gay during an interview in 2009.

In a touching video, he says: ‘A new study finds that more LGBTQ people living in the United States have been murdered so far this year than in 2016.

‘So this video is my response to this study.

‘I am a gay, Muslim, Arab-American man,’ he states proudly. And then repeats.

He continues: ‘I’m going to take it even further – not only am I gay but I’m also a bottom.

‘Not only am I a bottom, but I’m also a total bottom, which means I like it up you-know-where,’ he said.

He then had a message for every homophobe across America and the world.

He said: ‘If you ever come to me to kill me just because I’m gay, I will destroy you.

‘I might be gay and I might be a nice guy but don’t get it twisted because I will fuck you up,’ he added.

Sleiman played the character of Mohammed de la Cruz, an out-gay Muslim nurse in season one of Nurse Jackie.

Sleiman also addressed the controversy of his denying of gay rumors during an interview with the Advocate in 2009.

He took to Facebook again: ‘The advocate wanted to interview me,’ he started.

‘I told Showtime only on one condition, no personal questions. The advocate agreed.

‘At the end of the half hour interview over the phone the idiot interviewer, whom I think was gay, asked me if was gay or straight.

‘I was so shocked.

‘I froze. My body started shaking.

‘And then I lied and said I was straight. Shame on gay people who are not kind to other gay people. He did that on purpose,’ he concluded.

He then posted a screenshot of the Advocate article, which said he was straight.