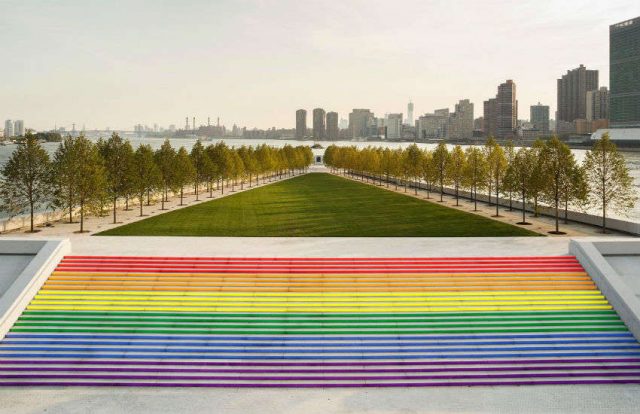 While the Trump administration tries to ban them in embassies, one park in New York City is transforming its steps into the city’s largest flag

On Saturday, 15 June the will host a free World Pride celebration for all ages. The event will include food trucks for a special picnic on the lawn (with food, wine and beer available for purchase).

There will also be a VideoOut system onsite ready to capture coming out stories for their online library.

There’s even going to be a Drag Queen Story Hour, at 12:30 PM and 2:00 PM. Drag stars will be reading books that focus on diversity and inclusion, from Little Bee Books, the organisers said.

From Friday, June 14 to Sunday, June 30, the Park’s monumental staircase will transform into a massive Pride flag. The main feature will be sponsored by New Tor-based media company, Bloomberg.

The aim is to celebrate the progress that’s been made over the past 50 years. It also serves to shine a light on the LGBTQ community’s continued fight for the universal human rights articulated in President Franklin D. Roosevelt’s Four Freedoms Speech. The four being freedom of speech & expression, freedom of worship, freedom from want, and freedom from fear.

Located on the southern tip of Roosevelt Island in New York City, in the East River between Manhattan and Queens, the Park is the first memorial dedicated to the former President in his home state of New York.