Ryan Smith and a friend hailed the cab Wednesday morning from Manhattan to Brooklyn, NBC News 4 reports. While en route, “the driver turned around to interrupt our conversation and was like, ’Are you gay?’” Smith says. “We were like, ’Uh…?’ But before we could ask again, he was like, ’Are you a gay man?’”

Smith and his friend then asked the driver to pull over on the Lower East Side, where the two men got out of the taxi. They were able to take a photo of the driver’s medallion number before he drove off.

“My head was spinning at this point,” Smith recalls. “I just wanted to get us out of the back seat of this bigot’s cab.” 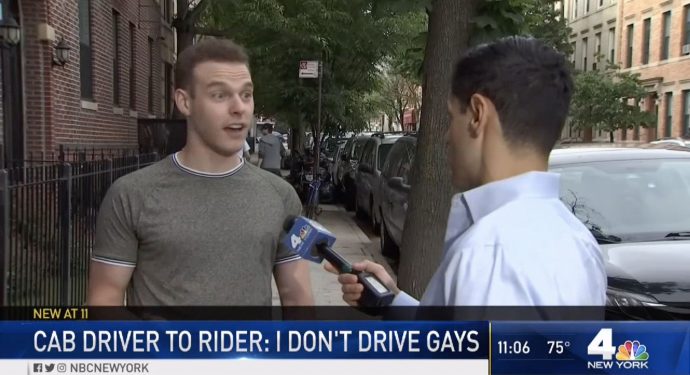 A spokesperson for the Taxi and Limousine Commission says in a statement, “This driver’s behavior, as described, was totally egregious and unacceptable, and we encourage you to report it to the TLC via 311 or NYC.GOVOnline so that we may hold him fully accountable for his actions. This is not alright… not here in NYC, and not anywhere.”

“Speak out, stand up against it, say it is not okay,” adds Smith of the driver’s homophobic behavior. “Absolutely not.”

This incident comes shortly after a lesbian couple were kicked out of a New York City Uber after sharing a brief kiss. That driver’s taxi license, a city requirement to drive for Uber, has been suspended while the TLC investigates.

Despite non-discrimination company policies for passengers and drivers that cover sexual orientation, multiple cases of anti-LGBTQ discrimination and even violence have been reported in recent months.

RuPaul’s Drag Race alum Aja and her boyfriend were reportedly kicked out of their Lyft in New York City last year for kissing.