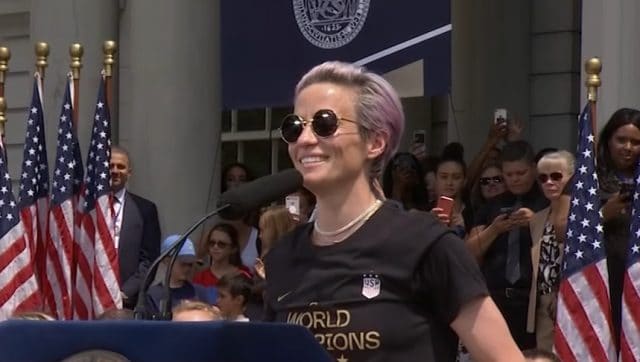 The New York Police Department (NYPD) hate crimes task force said it was investigating after the posters were vandalized with derogatory slurs at the Bryant Park subway station in New York.

Police confirmed to USA Today on Wednesday that the posters were cleaned or replaced with help from the Metropolitan Transportation Authority after the vandalism was discovered early Monday morning.

Rapinoe and her teammates attended a ticker tape parade in New York City Wednesday to celebrate their win in the World Cup final over the weekend.

NYPD Detective Hubert Reyes told the news outlet that the vandalism involved posters of Rapinoe, the team’s captain who is gay, in uniform along with “homophobic comments” degrading the soccer star.

“Hate has no place in the transit system and we work hard to make the subway a welcoming, safe environment for everyone,” MTA deputy communications director Shams Tarek said in a statement to the newspaper. “We referred this to NYPD which responded to investigate, our maintenance teams got the posters cleaned and we will have them replaced with new ones if necessary.”