Home Gay Life Ohio mayor and his husband arrested for beating the crap out of... 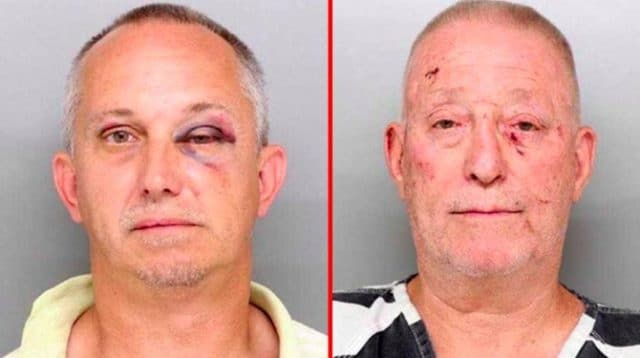 The mayor of Elmwood Place, Ohio, and the town’s maintenance supervisor–who are married to each other–were arrested for beating the crap out of each other following a day of drunken revelry at Pride, WLWT reports.

The violent incident happened over the weekend. Court documents reveal that mayor Bill Wilson and his husband, Bill Smith, had spent the day at Pride in downtown Cincinnati. After the celebration, a dispute over who was “drunkest” and who should be driving ensued. And on the car ride home, the argument turned into a brawl.

When the guys arrived home, witnesses say another fight broke out. Elmwood Place Police arrived at the scene to find Smith and Wilson drunk and rolling around in broken glass in the foyer of their home.

Both men were bleeding and had injuries to their eyes and scratches all over their bodies.

“That’s their mayor and they had to arrest him,” resident Brandon Spivey tells WLWT.

“You got to have a leader, you’ve got to have a good leader. You lead by example. That’s not by example,” adds resident Mickey Turner. “They should hold a higher regard of who they are and set a better example then out here in the public.”

Police were unable to determine who the aggressor was so they charged both guys with domestic violence and disorderly conduct and tossed them in jail.

The moral of the story: If you’re going to be drinking all day at Pride, take an Uber. Also, violence is never the answer.